Something For Everyone At Last Night’s New York Gubernatorial Debate 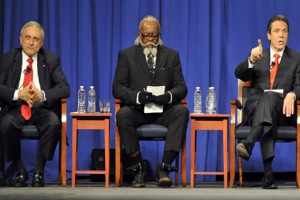 Earlier tonight, all seven candidates running for governor of New York met in a televised debate at Hofstra University. Most people already had an idea that Carl Paladino, the Republican candidate, was a bit eccentric, but after this debate– which could best be described as something approximating the 2003 California recall circus– the media may have done the political sideshow a disservice by ignoring everyone else in the race.

Yes, Carl Paladino was the most conventional candidate this side of Andrew Cuomo tonight, arguing against tax increases and excessive social program funding while madam Kristen Davis compared the MTA to an escort service and “Rent is 2 Damn High Party’ candidate Jimmy McMillan talked up his martial arts prowess. The AP (from which we borrow the photo) tactfully called it a “free-for-all,” and in terms of the way the candidates sold themselves, it pretty much was.

Armed with dark gloves, a website that looks like it was designed by Matt Drudge and Snoop Dogg (warning: extremely catchy MIDI track playing in the background), and a simple message, McMillian served as the most outstanding comedy relief candidate by far. He also had another essential function, however: because of seating arrangements, his was the act Carl Paladino had to follow answering most questions, making Paladino sounds positively boring after his rapidfire chanting style and repeated uses of his motto. Paladino, however, didn’t leave unscathed, as Davis took a swipe at his homophobic comments last week claiming higher taxes would make investors leave the state “faster than Carl Paladino at a gay bar.”

If Alvin Greene loses in South Carolina, he most certainly has a home in New York. Below are some highlights compiled by our video editor Jon Nicosia of tonight’s debate (with a h/t to Gawker.tv for the McMillan moments):