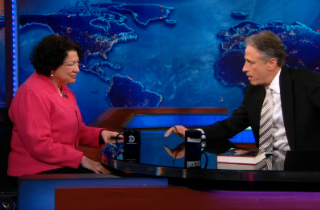 Appearing on The Daily Show last night, Supreme Court Justice Sonia Sotomayor gave a wide-ranging interview to Jon Stewart, explaining her difficult upbringing, her views on the public perception of the Court, and the motivations behind court decisions.

“If you want to be a part of history as a judge, then you know that what lasts is the force of ideas and the strength of your expression of them,” Sotomayor said. “So let it all hang out,” she continued to laughter and applause.

Asked whether there’s anything about her Supreme Court experience that has surprised her, Sotomayor said: “The passion that all of us have. We are all equally passionate about the Constitution, about the country, about what we do. It’s what let’s us put up with each other. More than that, you become friends with people who you know are working as you are because of the love of what you’re doing.”

Sotomayor also told Stewart that the Justices do not confer with one another before writing autobiographies, despite the high court being seen as the most private institutions in government. “I wrote it to be open and honest because I wanted people to identify with me,” she said.

On the public perception that personal background might taint a judge’s court decisions, Sotomayor said, “The public does often turn to items that have very little to do with your judicial philosophy.” Stewart put it in the context of her own confirmation hearings, in which her “Latina” background was used against her to say that she would be prejudiced in favor of any relevant cases that came before the court.

However, she joked that she doesn’t fear the judgement anymore because “I have a job forever.” She also joked that Chief Justice John Roberts breaks all ties for lunch orders among the judges.

Asked whether she believes the Supreme Court is more ideological and less about objective jurisprudence, Sotomayor said, “I don’t see our work as being political or partisan in the way sometimes the public portrays it. When you have strong views about how to approach thinking about the law, then that view is going to lead to certain results in certain situations. And so people seem to think this predictability is based on some kind of partisan political view. But it’s not. We have ways of approaching questions that we aspire to do in a consistent way.”

Stewart brought up how the media is quick to make the court seem political, and asked whether Sotomayor is keenly aware of the public perception of various court decisions. She said: “You know, we aren’t monks. We don’t sit in a cave. Hopefully most of us are involved citizens, so we do read the newspapers. Some of us may watch Jon Stewart.”

Watch below in three parts, via Comedy Central: