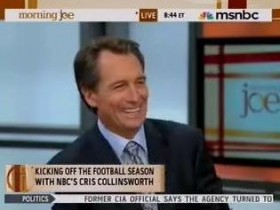 “The man joining us here — the new lead Gay Manelist on Sunday Night Football — he takes over the telestrator from the legendary John Madden.”

I swear that was how I heard it.

As a non-sports person who’d never heard of Cris Collinsworth before, I was only half-paying attention to the smiling, tanned man on screen with the Morning Joe team. I’d finished my last MJ post and had it on in the background while I busied myself with my computer. But then I heard Willie Geist say “Gay Manelist,” and I double-taked — why was Willie outing this guy on Morning Joe? What did it mean to be “the new Gay Manelist?” Were there other gay manelists?

I was thinking new show on Bravo, but the reality was much simpler: Collinsworth is the new GAME ANALYST. Ooooh. But honestly, check the tape — Willie really did say “gay manelist.” The video is below; see for yourself at 0:34. Not that there’s anything wrong with that.

Then again, it could just be me — I’ve done this before, most notably last year when I was sure I heard Jake Tapper talking about how Obama was trying to connect with Whitey. (What Tapper actually said: “Barack Obama says his Christian faith will help him connect with Whitey vangelicals who traditionally vote Republican.”) So, maybe it’s me.

But in any case: Former star Cincinnati Bengals wide receiver and popular radio host Cris Collinsworth has replaced John Madden on NBC’s Sunday Night Football, joining Bob Costas and Al Michaels as part of a powerhouse sports trio of whom apparently many people are aware. I bet a lot of those people know what a “game analyst” is. Well, now I do, too.