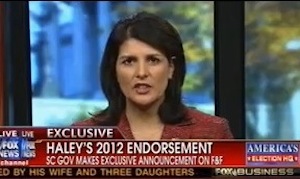 South Carolina Governor Nikki Haley endorsed Republican candidate Mitt Romney for president on Fox and Friends Friday morning. The gravitas of the moment was interrupted though by an awkward introduction by anchor Steve Doocy, who jokingly asked Haley “Is today the day you throw your hat in — you know, your support behind Jon Huntsman?”

Despite Doocy’s weird dig at Huntsman, Haley pressed on, and explained why she was supporting the former Massachusetts governor.

“This was something that when I look at the focus of what every family cares about: it’s jobs, the economy and spending,” Haley explained. “And what I want is someone who is not part of the chaos that is Washington. What I wanted was someone who knew what it was like to turn broken companies around and someone who had proven results by improving a failed Olympics that ended up being a great success story and someone that knows what it’s like to make a decision and lead, not just make a vote and Mitt Romney is that person. and I think now more than ever, we need someone that has the leadership to deal with a broken Washington in a way that we can get things done. And as governor of Massachusetts, you know, what we saw is he balanced his budget and he cut taxes 19 times with an 85% controlled Democrat legislature. That says a lot and something that we need from a good conservative governor at this time.”