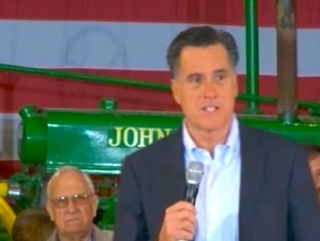 Mitt Romney is touring the South this week in anticipation of Tuesday’s primaries in Alabama and Mississippi. He has described it as something of an “away game,” and an interview on the nationally syndicated Rick and Bubba Show this week proved why: in discussing his policy stances, the hosts changed the subject to ask Romney about his Mormon faith, and to answer whether he thought America was the Promised Land, and not Israel.

Rick Burgess and Bill Bussey, hosts of the Rick and Bubba Show, were as polite as they were direct to Romney, asking questions that many had about the candidate’s ability to win the South. Asked whether he believed he could connect well with Tea Party conservatives and Evangelicals, Romney responded that he was “battling an away game” but thought his small government policies would win people over. He was asked specifically about his Mormon faith and what it meant that the Church of Jesus Christ of Latter-Day Saints believed in America as a promised land. Romney turned it into a policy question on Israel.

“I am without question committed to Israel as a Jewish nation,” Romney replied, adding that “Bibi Netanyahu and I are old friends.” He noted that he was not averse to “military, kinetic action” in Iran should they take possession of a nuclear weapon, either with or without Israel’s help. The candidate then spoke about the size of the government and how to reduce spending for most of the interview, save for the last question, which returned to the original question on faith Romney had dodged. “Do you, as a Mormon, believe America is the new promised land?”

“You’re going to have to go talk to the Church and ask what they think about that!” Romney replied, laughing, adding that “there’s no question that Israel is the promised land” but that his best guess was that “other lands are promised to other people.”

The full interview with Rick and Bubba below:

In a report on Romney’s Southern tour, CNN noted that the show was one of many campaign stops and an example of the sort of disconnect Romney faced in the South. Mississippi Governor Phil Bryant is sticking with Romney anyway, however. He told CNN yesterday that Romney had a “warm way about him” that he noticed when Romney was holding a baby. “I like to see a man when he holds a baby, and Romney looks like he’s held a baby before.” Whether that will guarantee him a win in Alabama and Mississippi next week remains to be seen.

The CNN report on Romney’s Southern campaign (and interview with Governor Bryant) below: