Speaker Boehner Responds To Obama: ‘The President Wouldn’t Take Yes For An Answer’ 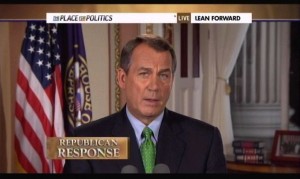 President Barack Obama and Speaker of the House John Boehner agree on one thing: no one in America hates Washington more than they do. In his response to the President’s speech, Speaker Boehner made it clear that he had had enough of “business as usual,” but that he could not hand President Obama the “blank check” that he had been requesting for so long.

Rep. Boehner began by noting his history as a businessman, and how he had been shocked by the “spending binge going in on Washington” that had brought the country so close to collapse. The speech had, just as President Obama’s did, several bittersweet punchlines like “I’ve got news for Washington– those days are over. It did not once mention the word “compromise”– an interesting point given that the marquee platitude in President Obama’s speech was that Americans were “fed up with a town where compromise has become a dirty word.” Instead, the Speaker went for the angle that everyone had agreed on a plan, and it was the White House that stood in the way of progress. Arguing that he had attempted to work with the President but that the latter “would not take yes for an answer,” he instead turned to the situation in Congress:

The sad truth is that the president wanted a blank check six months ago, and he wants a blank check today. That is just not going to happen.

You see, there is no stalemate in Congress. The House has passed a bill to raise the debt limit with bipartisan support. And this week, while the Senate is struggling to pass a bill filled with phony accounting and Washington gimmicks, we will pass another bill – one that was developed with the support of the bipartisan leadership of the U.S. Senate.

Obviously, I expect that bill can and will pass the Senate, and be sent to the President for his signature. If the President signs it, the ‘crisis’ atmosphere he has created will simply disappear. The debt limit will be raised. Spending will be cut by more than one trillion dollars, and a serious, bipartisan committee of the Congress will begin the hard but necessary work of dealing with the tough challenges our nation faces.

“The solution is not complicated,” he concluded, “if you’re spending more money than you’re taking in, you need to spend less.” Speaker Boehner, unlike the President, went for his audience’s heart and not their heads– he made the requisite self-deprecating point about how everyone hates Washington for a reason, but then aimed for hammering home the argument that when one does not have enough money, one stops spending before looking for other income sources. That argument style may be the key difference to members of Congress still on the fence about either plan, though whether the speeches had any impact on the American people is yet to be revealed.

Below, via MSNBC, the full speech: