Breaking: Sarah Palin Has No Balls

Breaking: Sarah Palin Has No Balls 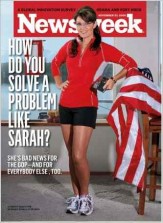 Whether you’re a fan of former Alaska Governor Sarah Palin or not, it is a fairly indisputable fact that she lacks testes, as does Arizona Governor Jan Brewer. The second thing that came to mind when I read Palin’s cojone baloney, then, was this: When attempting to describe Brewer’s alleged courage, why did Palin feel the need to confer new gonads upon the Arizona Governor, as though she was playing pin the tail on the donkey? Hasn’t this sexist trope been hiding (or hanging) in plain sight for long enough?

The first thing that came to mind, of course, was the multi-layered irony lasagna of Palin as arbiter of sac. Glynnis MacNicol correctly judges her a media genius, but resigning a governorship and being scared away from non-Fox News media by Katie Couric do not exactly bespeak fortitude (although she deserves credit for defending her family, an area in which she can be forgiven the occasional overreach). Additionally, I find it odd that someone who so closely identifies with “family values” would resort to such sexualized imagery.

The use of male sex organs to describe courage, foolish or otherwise, is so thoroughly woven into our popular vocabulary that I doubt it will ever change, but it promotes the sexist idea that this is an inherently male trait. There is no strictly feminine corollary. In fact, the closest colloquial cousins to be used to describe a strong woman with gumption are things like “ballbreaker” and “bitch.”

But do men really deserve credit for all of this bravery? True courage is an exceptional trait, on that should not be considered the default setting for peno-Americans. Thus, when Ed Schultz calls Harry Reid “ball-less,” he’s making the presumption that every man possesses this exceptional trait, and by extension, that women do not. Unless Sarah Palin pins some balls on them.

Ironically, the increased use of this decidedly regressive term is due largely to our progressively more permissive popular culture. There are other, non-sexual metaphors like “guts,” but these lack the attention-getting “Oomph!” of a reference to, or a kick in, the balls. Sexual imagery is integral to our culture, and I wouldn’t want to f**k with that, but isn’t there a way to be a little more evenhanded about it?

As for Jan Brewer and Arizona’s immigration law, it seems I am in the minority in thinking that its enactment didn’t take balls, but rather, a whole bunch of a**holes.