Spike Lee On ‘Too High’ Expectations For Obama: ‘He Was The Savior, Black Jesus’ 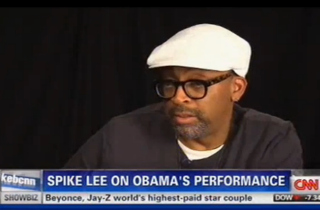 In an interview set to air Saturday on CNN, filmmaker Spike Lee told Don Lemon that he believes expectations were too high at the outset of Barack Obama‘s presidency, adding that people viewed him as a savior-like “Black Jesus” without regards to the fact that “the man’s not perfect.”

Asked by Lemon whether he believes the expectations were too unrealistic for President Obama, Lee said: “Oh, yeah. He was the savior, black Jesus.”

“I don’t care who it was,” he continued. “Expectations were way too high for what somebody can deliver, knowing how politics works and knowing that you have to deal with the Congress.” Lee then went on to criticize the Republican-led House as solidified in “Whatever you do, we’re blocking it. Every breath we take, we’re going to do what we can that you don’t get a second term. Bottom line. If it hurts America in the process, tough business.”

“The man’s not perfect,” Lee said when asked whether Obama has lived up to his promises. “Who’s perfect? My wife and I had a fundraiser at our house, we raised over a billion dollars for him. I’m going to do what I can to help that he gets a second term in office.”

“What do you think of the competition?” Lemon asked the filmmaker about presumptive GOP nominee Mitt Romney.

“It’s very obvious. You got this… and you got that,” Lee gestured with his separate hands. “It’s plain as day. Americans are going to have to make a choice: you can go this way or that way. There’s no in-between.”