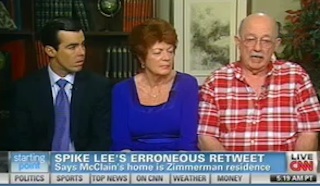 The elderly Florida couple, Elaine and David McClain, who were the victims of an erroneous tweet by filmmaker Spike Lee spoke to CNN’s Soledad O’Brien on Thursday. While they accepted the apology Lee posted on Twitter, they’re seeking a formal retraction before they can feel safe enough to go back home.

Last week, Lee sent the McClain’s address out via Twitter, purporting it to be the address of Trayvon Martin shooter George Zimmerman. “I Deeply Apologize To The McClain Family For Retweeting Their Address.It Was A Mistake.Please Leave The McClain’s In Peace.Justice In Court,” Lee subsequently tweeted.

Attorney Matt Morgan explained to O’Brien that he had contacted Lee’s representatives in hopes for a resolution to the incident.

“I have reached out to Spike Lee’s camp and received word from one of his publicists and I’m hopeful that we’ll be able to talk today,” Morgan detailed. “First of all, we’re grateful for his apology. We also would like a formal retraction. I think once a retraction is posted in a public manner, they’ll feel safe to go home because then the world will know for sure that George Zimmerman is not living at their home address. At that point in time, their safety would be okay and they would be okay to return home.”

Elaine McClain told O’Brien that the two had to seek refuge at a hotel and the ordeal has been particularly stressful.

Watch the McClain’s interview with O’Brien below, via CNN: