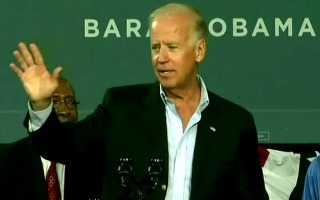 It has become a sadly predictable routine in recent weeks: a prominent member of the Obama campaign, reaching for a rhetorical flourish or a memorable sound bite, says something rather impolitic about their Republican opponents. When the comment blows up into a furor, President Barack Obama’s allies – and even members of the campaign – emerge to defend the remark. Now, spinning at several hundred RPMs, the President and his supporters in the media are making sure to cover up for Vice President Joe Biden’s assertion that Republican politicians are devoted to putting minorities “back in chains.”

The Huffington Post’s Sam Stein told MSNBC’s Alex Wagner that the focus on Biden’s remarks by the media and a gleeful Romney camp was merely a distraction.

“He stepped in it, obviously, rhetorically yesterday,” Stein offered obligatorily. “But we have a choice between what conversation we want to pick up off of what he said; one could have been about regulatory reform, which was the substance of what he was talking about. The other could have been about campaign ethics and what is over the line and what isn’t over the line.”

Stein chides the media for overlooking the substantive critique of financial regulatory reform that Biden was making over the crass and base invocation of American black slavery.

MSNBC contributor and Salon Magazine’s editor Joan Walsh was ahead of Stein on that one, noting that of course Biden was talking about regulatory reform when he said that Republicans want to put chains back onto his “mainly but not exclusively African American” audience.

In her column, “Joe Biden was Right,” Walsh says that she was, at first, uncomfortable with the obvious invocation of American slavery to tar his opponents. However, she made a complete 180 when the Obama campaign said that the reference to chains was a metaphor which described “social injustice.” Walsh applauds the Obama campaign for not backtracking or apologizing for Biden’s comment and says that she hopes the campaign will continue defend the remarks on their merits.

The Romney campaign almost certainly finds itself in agreement with Walsh here.

The Obama campaign itself took to furiously defending Biden’s remarks — first, by telling voters that they didn’t hear what they think they heard. Later, the spin shifted gears. Obama’s campaign staffers Stephanie Cutter and Jen Psaki made the rounds on cable news programs saying that Biden’s comments were nowhere near as bad as Republicans who have repeatedly used the word “unshackle” to refer to a myriad of circumstances. Oh, and more than one year ago, former Pennsylvania Sen. Rick Santorum said that “Obamacare” would lead to putting Americans in rhetorical chains as well.

Obama’s supporters threw whatever it could at the media in the hopes that one of those explanations for Biden’s thoughtless remark would stick. It has yet to be determined if the equivalencies will drown out the righteous aggrievement of an electorate that is exhausted by this kind of vitriolic campaigning.

This effort is eerily similar to the festival of damage control that followed President Obama’s fateful July speech in Roanoke, Virginia when he told his audience, “If you’ve got a business, you didn’t build that. Somebody else made that happen.”

The spin that followed that patently and clearly damaging remark was quite impressive. The President himself, along with his campaign, insisted that the quote in isolation was not nearly as damaging as it was in context – insisting his opponents were merely “splicing and dicing” his words.

The Romney campaign promptly responded by releasing a statement asking voters to listen to the whole statement in context. The pro-Republican PAC American Crossroads then released a 60-second ad featuring the entire Obama speech in context just to highlight how damaging it was.

Noting that the context line had failed to quell the controversy, the President shifted to the dubious defense that the “that” in “you didn’t build that” referred roads and bridges. Thus, the first descriptive pronoun in history to refer to two nouns in the sentence prior was born. “The meaning of ‘is’” was a stronger appeal to exoneration through syntax.

Now, we are in the midst of another spin class — one over a far more serious remark. Biden’s incredibly irresponsible and virulent statement is poisonous. By injecting the painful history of racial animus that surrounds slavery for electoral gain, Biden has committed a political sin. This is not a gaffe; it is a judgment error — and a critical one at that.

No doubt, the Vice President of the United States has abdicated his responsibility to the office and to posterity to be a measured and sane voice even amidst a brutal election. The comity of the nation is more important than the fate of one presidential administration. The current occupants of the White House do not seem to view politics that starkly – yet another reason why voters should reexamine whether the they are suited to the office in the first place.