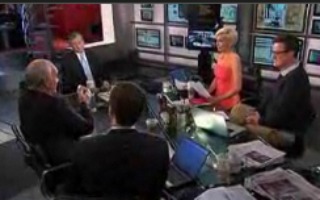 On Tuesday — the one year anniversary of Osama bin Laden‘s death, in case you’d been living under a fairly heavy rock — the Morning Joe crew took a look at whether it was appropriate for President Barack Obama‘s re-election campaign to tout the discovery and killing of the terrorist leader as a victory for the Obama administration this campaign season. In this case, is “politicizing” a dirty word?

“Nobody’s talking about it,” joked host Joe Scarborough. “Nobody’s bringing this up.” Gosh, why isn’t anyone trying to make “political hay” out of this during a campaign year?

Just yesterday, you’ll recall, President Obama responded to Mitt Romney’s quip that “even Jimmy Carter” would have given the ok to go after bin Laden in Pakistan, pointing to Romney’s earlier, conflicting statements on the matter.

Oh, I think it’s totally politicizing it. Which is like calling something a cult – – it’s a religion with which you do not agree. If you’re politicizing something, it means the other guy is beating your brains in and you don’t have anything to do about it, you can’t respond. I thought the ad was fascinating on 100 different levels. One is Bill Clinton as witness for the prosecution is historically fascinating. And, yeah, it’s political. Guess what? It’s going to be a close re-election.

Republicans have politicized this, and Democrats have politicized this, I mean, in the past. There are some noble examples of men who rise above mere politics in the midst of, I think, sacrifice by men and women of the military and the country as a whole. And you are going to be writing a biography one day on one of those men, The Last Gentleman, who refused — who refused –to make political hay over the Wall coming down, the end of the Soviet Union. Refused. In fact, Germans will still tell you today that their country would not be unified if George H.W. Bush had not acted in as dignified way as he did in 1989 and refused to politicize it.

And if the bin Laden mission had failed, Meacham added, Republicans would be calling the President weak and feckless, and possibly even calling for his impeachment.