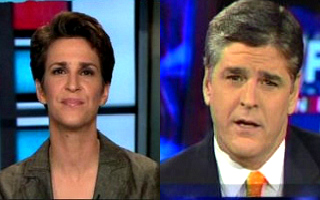 If cable news and political blogs had their way, presidential elections would be like the Summer and Winter Games: An event to exploit every TWO years.

Because this election season has been more generous than the Tennessee Titans defense to cable news networks across the board:

At MSNBC, Rachel Maddow and Lawrence O’Donnell are now doing the once-unthinkable: Sporadically beating Sean Hannity and Greta Van Susteren in the demo following even more hyperbole and hyperventilating at the Democratic National Convention. Over at Fox News, life is even better than usual as evidenced by its highest rating ever for coverage of the third debate on Monday night (particularly impressive when competing against a Cards-Giants Game 7 and Monday Night Football).

From Roger Alies (FNC) to Phil Griffin (MSNBC) to Ken Jautz (CNN), all the cable honchos hope the ratings ride can somehow continue after all votes are cast on November 6th. But outside of the return of hanging chads and Ralph Nader, a six-week recount, legal wrangling and all the high drama that would go with it ain’t likely.

However, a storyline with serious legs is now emerging as a real possibility: A split vote, so to speak, resulting in an Obama victory.

The scenario is the following: Mitt Romney wins the popular vote while the President wins Ohio and ekes out an Electoral College victory (say, 271-269). Since Romney can’t go for two and send it into overtime, its game over for the challenger, just as it was for Al Gore after he won the popular vote by 0.5 percent in 2000.

The popular vote storyline isn’t a stretch when considering Romney is at or above 50% in both Gallup and Rasmussen nationally, while the President is struggling to break (ironically) 47 percent…an alarming sign for any incumbent this late in the game. Most also agree that momentum still appears to be on Romney’s side (albeit slowed) to the point where it’s difficult to envision Obama taking back the lead with no major events left to be a game-changer (outside of the final jobs report set to be released on November 2nd, which isn’t looking promising for the President).

Like most sequels (Hangover II, Major League II, Taken II, Governor Jerry Brown II), this one promises to be pretty much the same movie as the first, but harder to watch. In what will be a mirror image of the way half the country and Democrats reacted in 2000, Republicans and conservative media outlets will be apoplectic in an Obama/Electoral, Romney/Popular scenario. If it happens, expect to hear the following from the GOP and its allies in the media:

“By not winning the popular vote, Obama has no mandate.”

“The President wants to end the Bush tax cuts? Fine…we won’t stop him.”

The third sentiment is the most troubling for Americans regardless of party. Much like today, talks will be non-existent between Republicans and Democrats on how to avoid the fiscal cliff. For those who don’t live in the cable news bubble, the fiscal cliff is the expiration of the Bush tax cuts, a simultaneous introduction of payroll tax increases and deep spending cuts (worth approximately five percent of the GDP) at the end of this year. Consequently, many leading economists fear this combination of fiscal events would push the U.S. back into recession unless an agreement can be hashed out before the ball drops on New Year’s Eve.

The president’s central platform throughout the entire campaign has focused on the rich needing to pay more in taxes. Some call this redistribution, others call it fairness…depends on your network of choice.

“Here’s his chance to back up that promise,” Republicans will say.

“I’m not bluffing,” the president will retort while threatening to veto any debt-reduction legislation that doesn’t include tax hikes on the wealthy.

“Countdown to the Cliff” clocks perpetually running on L3s (lower thirds) screens from FNC to CNBC to HLN to (fill in your network acronym here). Having worked in cable news for years, there is one hard, incontrovertible fact: If there’s ANY possibility to run a countdown clock down to ANYTHING, it WILL be done.

Because most news is arbitrary and unpredictable…

A fiscal cliff, like New Year’s, a debate start or scheduled building implosion, is something producers can actually predict.

Much like 2004, Romney supporters will also scream about voter fraud. Then-MSNBC’s Keith Olbermann did dozens of segments on alleged fraud in Ohio following Bush 43’s victory over John Kerry for months despite no other program discussing it. So it was no surprise after an objection to the Ohio certification was put to a vote two months after the election, the Senate voted it down 1–74, while the House objection ended up being 31–267. No matter…KO solidified his appeal to the Daily Kos crowd on his show just by broaching the topic nightly.

Expect the same hysteria from conservative outlets if Obama holds on to the White House without earning more votes nationwide than Romney. In fact, there’s already one such story making the rounds out of North Carolina of voting machine issues resulting in votes intended for Romney going to Obama in early voting. According to officials, the problem has since been corrected, but the stench is already out there…

Likewise, expect the same from MSNBC if Romney is the victor. On cue, the network’s website is already openly exploring a flimsy and unsubstantiated connection between one of Tagg Romney’s investments and voting machines deployed in Ohio. That story has already been debunked even by left-leaning publications, but was still too juicy for Peacock web editors to pass up when attempting to get a little cheap mileage out of it.

And as sure as the Giants will win the World Series, you can bet Democrats will gloat over payback for Bush-Gore in Obama/Electoral/Romney/Popular situation. Maddow and Maher will compete for the who-can-make-the-more-omnipotent-smirk-to-piss-off-Republicans award, all while doing sore loser stories on the GOP through Easter. And 94 percent of Jon Stewart’s show (as opposed to the 83 percent seen now) will be dedicated to FOX News and its reaction to an Obama “split” victory.

There’s also a scenario that results in a 269-269 Electoral College tie, an outcome that would translate into OJ-Chase-like ratings as a bonus to the networks while the country descends into chaos (hopefully from just a rhetoric perspective) over the way the tie is broken. In short, since Republicans currently control the number of state delegations, they would break the tie obviously in favor of Romney. The process has been in place since the founding of the republic, but don’t expect average folks to not cry foul, especially if Obama wins the popular vote.

And then there’s a subplot within the subplot of a Romney-Biden White House. In an effort to avoid setting myself on fire after attempting to explain the complexities of it, suffice it to say that there’s as much of a chance of this happening as a Jacksonville-Carolina Super Bowl this year.

In the end, all of cable news (and to a lesser extent, the broadcast networks) benefit when a country and its government become more divided.

The less positive for the populace, the bigger the advertising revenue…

Fear and loathing is what sells these days.

And if there’s any ambiguity around the result of this Presidential election, the two won’t be in short supply.