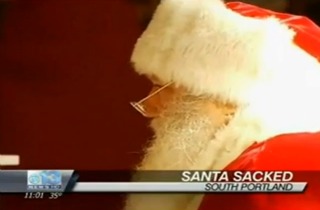 Turns out, everyone’s susceptible to the holiday blues: a mall Santa was fired in Maine for being a downright grinch. Parents complained and fa-la-la-la-la, he lost his job.

Taking to Facebook, the angry parents voiced their irritation with the Scrooge Santa. The mother of 6-year-old Chantel Mailhiot told WGME 13 that the Santa wouldn’t allow her daughter to sit on his lap simply because she didn’t purchase a $20 photo package. Apparently, though, it gets worse: even after little Chantel told Santa she wanted an American girl doll, he told her that instead, she’d get an “American football.”

After Chantel’s mom went on Facebook to lodge her complaint, she found a sea of complaints from other parents regarding the callous Santa, as well. Janelle Bavota wrote, “The Santa here is extremely rude, abrupt, and has no holiday spirit whatsoever. I was very disappointed.” Others complained of “dirty looks” from the Santa to their children.

“We had the same experience today. He made my 11 year old son cry [sic] – basically told him he was being greedy – my son who has neurological problems and very much believes was so confused!!! I don’t know what to do now. If I take him to a new Santa elsewhere my kids might notice the difference. They have always believed the mall had the real Santa.”

Apparently, bad Santa’s predecessor was better: Vanadu Van commented, “You should have the Santa you have had in years past! He is a great Santa and I really enjoyed him. He’s great with the kids! You can tell he really loves what he does and passes the true spirit and joy of Christmas along.”

The Maine Mall responded to the complaints, telling customers they had fired the bad Santa and cleared up mall policy:

“We expect Santa to treat all children equally, always have. There are no codes, slanted policies, or exceptions. This is something we have been crystal clear about with Santa every year. ANY person (kids, teens, adults… even pets on Monday nights!) can sit on his lap, talk to him, get a candy cane or whatever souvenir he’s handing out if he hasn’t run out that day (which can happen). ALL, whether you buy pictures or not. It’s an OPTION, not a requirement, to buy photography packages. Many parents’ issues result when they take out their cell phone to snap a quick shot, ignoring the posted ‘No personal photography signs.'”

The mall also told customers to speak up about any problems they face, saying, “We encourage families to call us personally when there are issues so that we can relay the stories to the staff involved, insist on changes when possible, and continue improving the percentage of families who are happy.”

Watch the full clip below, via WGME: