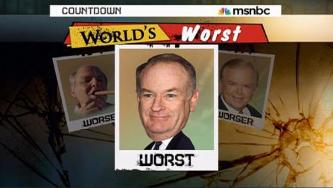 General Electric is no longer letting Keith Olbermann take the lead in responding to Bill O’Reilly. After O’Reilly’s segment Tuesday night attacking GE, the company is coming out and responding for the first time to the FNC host.

GE tells the Associated Press the thinly-sourced report was “irresponsible and maliciously false” – and last night, Olbermann took it even further.

O’Reilly’s report included the caveat that he “has been told, but cannot confirm, that the General Electric corporation is under suspicion in the case.” And this lack of sourcing meant, according to GE, an egregious error.

GE does not do business with Corezing, and does not produce the radio frequency modules that were described in the report, he said.

“We usually do not respond to the misleading and inaccurate claims made on this program because very few people take them seriously,” Sheffer said, “but tonight’s report took this smear campaign to a new low.”

GE better not be wrong about either of these facts, because O’Reilly will only use this as a reason to hammer the company that much harder and more often. But if it’s true GE has never done business with the company in question, and that they don’t even produce the modules, O’Reilly should (and has proven in the past he probably will) apologize to his viewers for getting the facts wrong.

Then there’s Olbermann. Naming O’Reilly the “Worst Person” again last night, he spun the GE errors into a much larger problem. “You can talk all you want about feuds and ceasefires and childishness, but if I, or any actual reporter like me, had gotten as much wrong in any story as Bill O’Reilly got wrong in this one, I’d be fired in 15 minutes, as he should be now,” said Olbermann. Wait, Keith thinks he’s an “actual reporter”?

(On a slightly different note: here’s more on Olbermann and ‘Truce’-gate, from a disenchanted fan.)