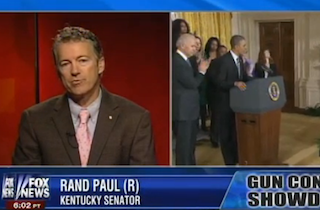 All right, who’s ready to stand with Rand once more?

While the shooting in Newtown was a tragedy, Paul deemed it “a mistake for either side to the politicize” the situation. President Obama has been using “them as a backdrop and drama for getting some kind of political will.”

“Call me if any of your reforms would’ve saved those kids at Sandy Hook,” Paul asserted, adding that he’s “all for saving lives” (good to know, Rand). The senator stressed his opposition to using the incident to spark something political, which prompted Bolling to mention Reid’s gun control bill.

Asked if he’ll filibuster, Paul said, “We plan on making them have at least 60 votes to pass any legislation that may abridge the Second Amendment. So we will fight tooth and nail, and use every parliamentary procedure to stop that from happening.”

Paul argued, as many others have, that we do have gun laws on the books that can be effective. “None of this would’ve changed the outcome,” he insisted.

Bolling was stuck on the point about the filibuster, pressing him again for a point-blank answer on whether he’ll use that approach to oppose the legislation. “We will filibuster the bill,” Rand replied. “We won’t let them bring it forward because our fear is that once it comes forward, they’ll come forward with something that sounds benign in the beginning” — but will infringe on Second Amendment rights.