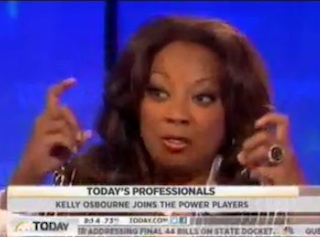 During a segment on The Today Show Wednesday, panelist Star Jones lashed out at Karl Rove‘s anti-Obama ad that criticized the President for being “too cool.”

Panelist Donny Deutsch thought it was a “fantastic ad,” adding that it was setting up “vanilla and boring” — that is, presumptive GOP nominee Mitt Romney — as “the new black,” a statement he’d made previously on MSNBC’s Morning Joe.

“What worries me is that it’s another attempt to paint Obama as an ‘other,'” said Jones. “You know, they tried that with ‘Oh, he ate dog meat when he was a boy’ and McCain tried this.”

“I hope this isn’t a black/white issue,” Deutsch responded.

“Well, first of all, you’re the one who just said vanilla,” Jones hit back.

RELATED: Morning Joe On Romney Vs. ‘Celeb’ Obama: ‘Vanilla Is The New Black’

“Let me make my point,” she continued. “In 2008, McCain did this ad… he was the American Americans were waiting for. And it didn’t work in 2008. And when you’re pointing the finger saying he’s different than us in some way, I think it is a subconscious attempt to differentiate him from the rest.”

Co-panelist Kelly Osbourne thought the anti-Obama actually made him look good. “I look at it, and I find it empowering,” she said.

“It’s against him, but what I’m saying is that they’re wrong in what they’re doing is because you have to grow with the times. It’s all about social media,” she said