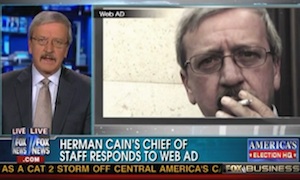 Fox News’s Megyn Kelly scored an exclusive interview with the star of Herman Cain‘s hot new viral web ad, Mark Block, who is featured in the clip defiantly blowing cigarette smoke at the camera. Kelly introduced Cain’s chief of staff by noting that people have been “dizzified” by the political ad. “The message behind the ad was to our supporters that we’re on a roll,” Block explained. “We’re excited about what’s happening. There was no subliminal message. In fact, I personally would encourage people not to smoke. It’s just that I’m a smoker and as a lot of people on the staff said, ‘Just let Block be Block.’ That’s what it was all about.”

Kelly asked if the quirky web ad was trying to reach out to regular joes. “Were you trying to appeal to folks who are out there living real lives, working the farm, working in Detroit, that kind of thing as opposed to the East and West coast elite, people in media circles, who shun smoking, and, you know, sort of real American things?”

“I tell you, you walk into a veteran’s bar in Iowa, and they are sitting around smoking, and, you know, yeah, we are resonating with them,” Block exclaimed. “I’m not the only one that smokes in America, for God’s sake! It’s a choice that I made and it was at the end of the ad, but the real message that we were trying to get through is that the Cain train is on a roll!”