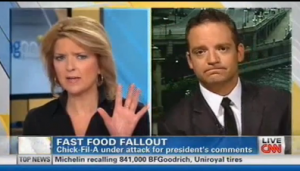 Chicago aldermen Joe Moreno appeared on Starting Point Friday morning to discuss his city’s — and others’ — reported attempts to block Chick-fil-A from opening restaurants in the area in the wake of the chicken chain’s take on same-sex marriage.

“I want to be very clear,” Moreno told substitute host Christine Romans. “I said from the beginning, it’s not about what people believe or what they say. That’s protected, and I would be the first to protect any of that.” But if those beliefs translate into discriminatory hiring or serving practices, he said, he would step in.

“Should you be stalling or denying any new jobs creator just because you don’t agree with what the guy thinks?” Romans asked, referring to the opinions of the company’s CEO.

“Well, your premise is incorrect,” Moreno replied.” “It’s not about what I disagree with what he thinks. He used the language as a ‘we’ and’ we were going to do this’ and ‘we’re going to do this.’ That’s more than one person. And, again, it doesn’t matter to me about anyone’s beliefs. They have the right to do that or what they say. That’s been mischaracterized in this discussion by some. The bottom line is that if the discriminatory policies are there or there are lack of protections that are there for a constituency that is very much alive and thriving in Chicago, then I have an issue with that, just as we have in our civil rights history.”

“I guess you’re breaking news this morning because I have never heard of an allegation of discrimination that Chick-fil-A has either in their hiring process or their serving process towards gay couples,” said panelist Will Cain. “Are you suggesting today that Chick-fil-A in fact has been doing that?”

“Well, I would suggest that if you’ve never heard that if you talk to the Civil Rights Agenda, which is a LGBTQ group that is dealing with some issues just like that, in terms of firing or being felt unwelcome and inappropriate in their hiring of individuals that are in the LGBT community. They are working on that,” said Moreno.

Cain reponded by calling Moreno out on changing the content and wording on his message from yesterday.

“Alderman,” Romans pointed out later on in the segment, “We at CNN have not substantiated any of these claims about the company actually in its hiring or serving practices putting this into — using anything discriminatory. We’ll look at that. And you’re saying if, if. So let’s play the if game, then. If Chick-fil-A is not doing anything discriminatory in its hiring or in its serving, then you’re not going to let the opinion of the president stop you from creating jobs in your district?”

“Again, eight or nine months I have been working on this without any public exposure from me or from the LGBT group or from Chick-fil-A,” Moreno reiterated. “We have been working on this, and this is their words, not mine, they will no longer donate dollars to any organization left, right, or center that has a political agenda. That was one thing that we were working on.”