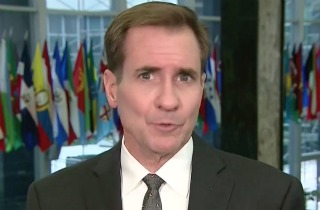 Appearing on Fox & Friends Wednesday morning, State Department spokesman John Kirby said it was irrelevant that Janice Jacobs, the new “email czar” in charge of coordinating the release of Hillary Clinton’s emails, had donated thousands of dollars to her campaign.

Host Steve Doocy accused the State Department of being nontransparent during its announcement of a position designed to increase transparency. “She had taken $2700 out of her own pocket and put in the Hillary campaign. That looks not so fair and balanced,” he said.

“I would say we didn’t talk about it when we announced her yesterday because it’s not relevant,” Kirby responded. “There’s no prohibition against doing that kind of thing. She’s the right person for this job because of the experience she has leading large organizations and enacting reform and change.”

Co-host Brian Kilmeade wasn’t convinced: “But if she put $2700 to make sure someone becomes president, and she has something in her hand to prevent them from becoming president, it’s hard for people to believe she’ll approach this in a balanced and judicious way.”

“I think if you look at her career over so many decades, in Republican and Democrat administrations, you’ll see she’s balanced,” Kirby said.

“How much money did she give George Bush?” Kilmeade shot back.

“I don’t have that kind of information, and again, it’s not relevant,” Kirby said.