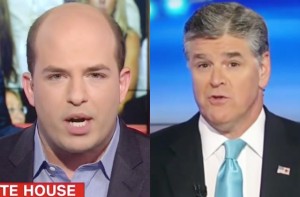 CNN’s Brian Stelter ended today’s Reliable Sources by going after Sean Hannity for his “irresponsible” propping-up of Donald Trump‘s talk that the election will probably be “rigged” so he doesn’t win.

Lots of people in political and media circles have called that kind of talk dangerous and alarming, especially coming from a presidential candidate. But as Stelter pointed out today, Hannity just went ahead and gave Trump an open platform to say all of it without challenging him. (Stelter teased the clip by saying, “Let me show you how not to interview a candidate about something as serious as this.”)

Oh, and Hannity has independently taken that ball and run with it on his own.

Stelter said that Hannity and Bill O’Reilly “failed their audience” in not questioning Trump on this serious, “dangerous” charge.

And he ended with this:

“Hannity’s not a journalist, but he has a megaphone, and he’s using his megaphone irresponsibly. If a Democratic candidate were saying this stuff––saying the election could be rigged––then every word of this essay would apply to him or her. But right now, it’s the Republican candidate for president who’s trying to delegitimize our democratic process without proof. It is unpatriotic for any interviewer or any journalist to help him.”

UPDATE –– 12:45 pm EDT: Hannity responded by asking Stelter why he didn’t address something that, er, he addressed:

Hey Brian check Philly enquirer after 2012. How many districts not a single Romney vote. Check Cleveland. Do u prep? https://t.co/5XORZzkdXQ