Stelter on Beck’s ‘Self-Reflection’: ‘There May Be a Business Motive to This’
VIDEO

Stelter on Beck’s ‘Self-Reflection’: ‘There May Be a Business Motive to This’ 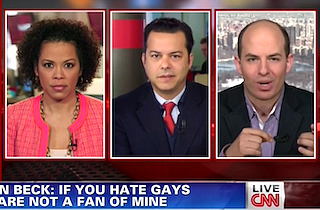 On Tuesday, former Fox News host Glenn Beck had a deep meaningful with Megyn Kelly, in which he owned up to his role in “helping tear the country apart,” a moment many have characterized as one of self-reflection. During a panel discussion on Thursday morning, CNN media critic Brian Stelter wondered if Beck’s softer tone had something to do with his efforts to get his cable channel, BlazeTV, picked up for national distribution.

“I do think there might be a business motive to this,” Stelter said. “Call me cynical, but Glenn Beck is in the business of trying to get a cable channel nationally distributed. He needs as many cable operators to like him as possible. He’s had success already getting his channel carried across the country. But he has a lot more operators to convince. But I wonder if he’s trying to put on a friendly face now that he’s trying to get his channel more broadly carried.”

“You’re calling him a conspiracy theorist, I hear the panel full of theories about Glenn Beck,” said Amy Holmes, who writes for Beck’s website The Blaze. “I would put away the knives here. I’d like to see more of the mainstream media engage in the self-reflection in terms of story choice and tone. I think Glenn Beck is leading the way.”

“Meanwhile, I’m one of the guys who wishes I could get his cable channel here in New York,” Stelter said. “I hope he gets broad distribution. I’d like to hear what he says. I wish we had better access to what he said now.”