Stelter to Dan Savage: Why Did You ‘Lower Yourself’ to Ben Carson’s Level?
VIDEO

Stelter to Dan Savage: Why Did You ‘Lower Yourself’ to Ben Carson’s Level? 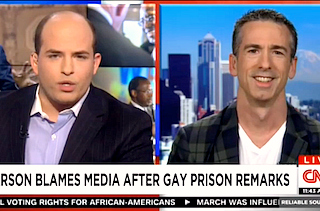 After neurosurgeon headline-generator Ben Carson’s claim last week that prisons proved homosexuality was a choice, sex advice columnist Dan Savage invited him to suck his dick and see if that changed him. On Reliable Sources Sunday morning, host Brian Stelter asked if Savage had gotten as vile as Carson in his response.

“Some people thought that was equally vile,” Stelter said. “Why do you think it’s appropriate or necessary to lower yourself to that level?”

“Sometimes you have to fight fire with fire,” Savage said, invoking the indisputably enjoyable example of when he redefined the meaning of Santorum and ruined the then-presidential candidate’s Google results.

“Rick Santorum and Ben Carson have compared gay people to child rapists, to people who have sex with animals, necrophilia,” Savage said. “Sometimes to get the attention of someone like that, to make it clear to them how low and disgusting and vile they’re being, you have to meet them on the field where they are doing battle, and take them on.”

Savage drew out the consequences of the argument that homosexual is a choice, which are ultimately legal. “That’s really not the argument they’re making,” he said. “What religious conservatives and Republicans are saying when they say that being gay or lesbian is a choice, is that gay or lesbian or queer people shouldn’t be covered under civil rights law…because being gay is not an immutable characteristic.”

He pointed out that while being gay is not a choice, what religion you follow is, yet religious practices are protected by the Bill of Rights.