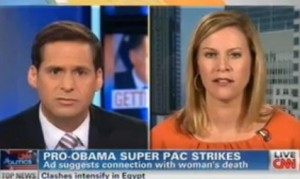 On day two of the controversy surrounding the curb-stomping ad from pro-Obama SuperPAC Priorities USA Action suggesting that Mitt Romney shares some blame for the death of former steelworker Joe Soptic’s wife, the Obama campaign has taken a step closer to forming a response. On CNN’s Starting Point, Deputy Campaign Manager Stephanie Cutter wouldn’t endorse the ad, but corrected fill-in host John Berman on a key fact in the ad.

The ad, from former White House spokesman Bill Burton‘s Priorities USA Action, is unquestionably brutal, portraying Romney as an inhuman corporate raider who shares moral culpability for the death of former steelworker Joe Soptic’s wife. The ad features Soptic telling the story of how, following the closure of the Kansas City GST Steel plant, he was unable to provide health insurance for his family. “When Mitt Romney and Bain closed the plant,” Soptic says, “I lost my healthcare, and my family lost their healthcare. And a short time after that my wife became ill.

“I don’t know how long she was sick and I think maybe she didn’t say anything because she knew that we couldn’t afford the insurance,” he continued, “and then one day she became ill and I took her up to the Jackson County Hospital and admitted her for pneumonia and that’s when they found the cancer and by then it was stage four. It was, there was nothing they could do for her. And she passed away in 22 days.”

On CNN’s The Situation Room Tuesday afternoon, Wolf Blitzer and Brianna Keilar performed a fact-check on the ad, and found that it omitted several key details from Soptic’s story, details which, in my view, did little to change the premise of the ad. Soptic told Keilar that when his plant closed in 2001, his wife still had insurance through her own job, which she then lost in 2002 or 2003 when an injury forced her to leave the job.

As the ad states, he didn’t know how long she had been sick, but by the time she finally sought medical attention for pneumonia in 2006, she was diagnosed with stage 4 cancer, and died within weeks. It’s fair to argue just how many details you can pack into a 60 second ad, versus whether those omissions were misleading, and you can certainly argue the fairness of leading a policy debate with such a charged anecdote, but nothing in the ad was outright false.

The Obama campaign and the White House were caught flat-footed yesterday, responding to the ad by strenuously not responding. White House Press Secretary Jay Carney refused to comment because he hadn’t seen it, but later told Keilar that once he’s had a chance to see it, he still won’t comment. In an appearance on The Situation Room, Obama campaign Press Secretary Jen Psaki refused to weigh in on the ad, and actively sought to distance themselves from it, telling Wolf Blitzer “As you know, we have about as much to do with Priorities’ ads as we do with Michael Phelps winning gold medals.”

That’s all well and good, but Psaki’s refusal to engage on the ad meant that she couldn’t challenge Blitzer’s characterization that the ad was “full of falsehoods.”

Even Priorities USA seemed to be backing away from the ad. When I interviewed Wolf Blitzer Tuesday afternoon, he told me they were doing a fact-check for The Situation Room, and that he planned to have on Bill Burton and CNN contributor Paul Begala, who is also a member of Priorities. By the time the show aired, they were both unavailable.

However, on Wednesday morning’s Starting Point, Stephanie Cutter appeared to indicate a new direction on the ad. While still reminding host John Berman that the campaign had nothing to do with the production of the ad, and without endorsing the notion that Romney was responsible in some way for the death of Soptic’s wife, she did defend the ad from a factual error by Berman, and reinforced one of the key points of the ad.

Berman played a clip from the ad, then said “There are plenty of questions about the timeline of this. This man obviously, and we are sorry he lost his wife, you know, is suggesting that she died because of action that Mitt Romney took. He, of course, had left Bain years before Bain took over this company…

“Is this ad accurate? Is it fair?” Berman continued,

“I don’t know the facts about when his wife got sick, or the facts about his health insurance,” Cutter replied, “but what I do know is that Mitt Romney personally handled the deal to take over GS Steel, and personally handled some of the decisions made to load that company up with debt so much that it went underwater, it went bankrupt. And you just said that he left the company before the deal was made. that’s not true. Mitt Romney made that deal.”

To be clear, the deal to acquire GS Steel, and the massive debt the company incurred so that Bain could extract tens of millions of dollars, all occurred before Romney “left Bain Capital” to run the Winter Olympics in 1999, a point which Cutter may have muddied by renewing the dispute over whether Romney can be held responsible for the company he owned.

“You know, he says that he left Bain Capital in 1999 to go run the Olympics,” Cutter said, “But if you remember, according to the SEC forms that he filed, he was still president and CEO of that firm. He was still taking a salary, and I guarantee you that when GS Steel went bankrupt that Mitt Romney personally walked away with a significant profit, while Joe lost his job. So that’s what really that story is about.”

She added, “I do think that most people think that if you’re still CEO that you’re in charge.”

Most significantly, though, Cutter continued to defend aspects of the ad, even when confronted with the premise that “this ad basically accuses Mitt Romney of basically killing her.”

Bain also walked away from the company’s pension obligations, leaving the federal government to bail them out to the tune of $44 million.

Berman’s thumbnail characterization of the ad, that it “accuses Mitt Romney of basically killing” Joe Soptic’s wife, isn’t entirely fair, either. That’s the most extreme interpretation possible, one which has permeated the media conversation of the spot, but that’s not really what it says. Even within Joe Soptic’s narration, there are several self-evident factors which led to his wife’s death, and his conclusion isn’t that Mitt Romney is at fault, but that he “doesn’t realize” and “is not concerned” with the human fallout from his business deals.

On that score, I haven’t heard anyone, even Mitt Romney, ever argue that Bain Capital did everything possible to avoid layoffs. His one and only job was to make maximum profits, even if that meant peddling R-rated movies. That’s a perfectly defensible position, and it would be nice if Romney would defend it, rather than simply complaining about how mean Bill Burton is.

There are fair criticisms to be made of this ad, principally that its inflammatory premise overshadows the legitimate points it raises, but Cutter took the bold (and risky) step of not running away from the facts in the ad. Time will tell if Team Obama continues to try and thread that needle.