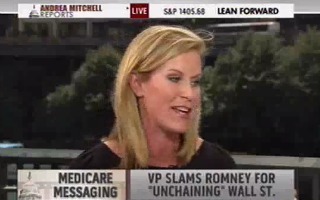 Speaking to a group of supporters in Virginia on Tuesday, Vice President Joe Biden said that Republicans “want to put ya’ll back in chains.” Mitt Romney‘s campaign responded with outrage and said that the Vice President’s comments “are not acceptable in our political discourse.” The Obama campaign’s Stephanie Cutter was asked about those comments and said that she felt the Romney camp’s outrage was disingenuous. She went on to say that President Barack Obama’s campaign has no problem with Biden’s comments.

In a statement, Romney campaign spokesperson Andrea Saul said that Biden’s comments “are not acceptable.”

After weeks of slanderous and baseless accusations leveled against Governor Romney, the Obama Campaign has reached a new low. The comments made by the Vice President of the United States are not acceptable in our political discourse and demonstrate yet again that the Obama Campaign will say and do anything to win this election. President Obama should tell the American people whether he agrees with Joe Biden’s comments.

Speaking to Andrea Mitchell on MSNBC, Stephanie Cutter , Obama’s Deputy Campaign Manager, said that the Romney campaign was engaging in “faux outrage” and that the Obama camp has no problem with Biden’s comments in their full context.

“We have no problem with those comments,” said Cutter.

‘If you want to talk about the use of words, then take a look at Mitt Romney’s stump speech where he basically calls the President un-American,” said Cutter.