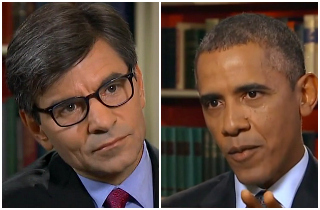 In the final segment of his lengthy interview with President Barack Obama Sunday morning, This Week host George Stephanopoulos asked if 2013 had been a wasted year for Obama, as the vast majority of his legislative priorities were stagnant.

“You put gun control at the top of the agenda, immigration reform, climate change,” Stephanopoulos said. “All of it stalled or reversing. How do you answer the question that beyond the deficit, this has been a lost year, and how do you save it?”

“On immigration reform, we got a terrific bipartisan vote out of the Senate,” Obama responded. “You had Democrats and Republicans in the Senate came together, come up with a bill that wasn’t perfect—not my bill, but it got the job done. It’s now sitting there in the House. If Speaker Boehner put that bill on the floor of the House of Representatives right now, it would pass.”

“So the question then is not whether or not the ideas we put forward can garner a majority of support, certainly in the country,” Obama continued. “I mean, gun control, we had 80%, 90% of the country that agreed with it. The problem we have is we have a faction of the Republican Party, in the House of Representatives in particular, that view ‘compromise’ as a dirty word, and anything that is remotely associated with me they feel obliged to oppose. My argument to them is simple: that’s not why the people sent you here.”