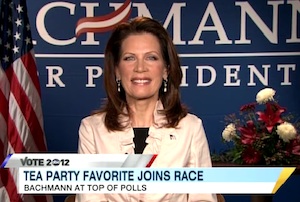 Michelle Bachmann appeared on Good Morning America today and was respectfully confronted by host George Stephanopoulos over what PolitiFact has deemed “false statements” the GOP presidential candidate has made in the past, particularly her claim that America’s “founders” had “worked tirelessly” to end slavery. Bachmann appeared to double down, specifically citing the emancipatory efforts of founding father John Quincy Adams. When Stephanopoulos pointed out that Adams was not, in fact, a founding father, Bachmann reiterated that as a boy, he “certainly was a part of the Revolutionary War era.” Gotcha?

Sadly, the whole back-and-forth is likely to alternately reinforce pre-existing notions about Bachmann, and the mainstream media that many feel are biased or out to get conservative candidates. However, let’s look at the facts and see what we can determine on our own.

When Bachmann initially made the comment about our country being founded on diversity, she was largely ridiculed by many for what seemed like, at best, her rounding of pretty big historical corners in making a larger rhetorical point about what she feels makes this country great. But did she actually say that our Founding Fathers worked to end slavery. Not exactly — she used different, looser language like “forbearers” and “the very founders that wrote those documents worked tirelessly until slavery was no more in the United States.” So while she literally did not say “founding fathers worked to end slavery,” it’s not at all unfair to interpret her comments as such, which earned her a healthy dose of criticism. (Watch the portion of her original speech in which she addresses this issue here.)

Stephanopoulos appears to take some restrained glee in his blog post titled “John Quincy Adams a Founding Father? Michele Bachmann Says Yes.” It is true that John Quincy Adams is not a Founding Father, but a smart follow-up question might be, does the average voter know the difference or even care? The answer is probably not, so to hold Bachmann’s feet to the fire over confusing John Quincy Adams with the Founding Fathers, one of whom was his father, John Adams, the second president of the United States, is certain to be viewed as her supporters as overkill. For everyone else, it’s just another Bachmann gaffe for the pile.

Watch the clip below, courtesy of ABC News (transcript of which follows the clip):

Stephanopoulos: Sarah Palin in Iowa, President Obama in Iowa, one step ahead of them – Congresswoman Michele Bachmann. She made it official in Iowa yesterday. This morning she is in New Hampshire. Thanks for joining us congresswoman.

Bachmann: Thank you George, it is great to be with you this morning.

Stephanopoulos: In your announcement you said ‘my voice is part of a movement to take back our country.’ From whom?

Bachmann: Well, from the people all across the nation. The voice that I learned growing up in Iowa was a very reasonable common sense voice and that is one that I’ve learned, that I’ve taken to – very successfully to the halls of Congress. And now I want to take that to the White House so that we can get the country back on the right track and get job creation going. That’s the message that’s resonating with people and that’s why so many people have been going to my new website that we launched, michelebachmann.com. They are joining up on Facebook and Twitter. It’s really a growing movement, we’re in New Hampshire today and we’re on our way down to South Carolina to start our bus tour so we are very excited with the response from people all across the country.

Stephanopoulos: You have been making a lot of progress, also getting a lot of scrutiny. I am not going to get too deep into the “flake” flap from Sunday. But as you make progress in this campaign everything you say is going to get more scrutiny. And the Pulitzer Prize winning website, Politifact, has found that you have the worst record of making false statements of any of the leading contenders. And I wondered if you wanted to take a chance to clear up some of your past statements. For example earlier this year you said that the Founding Fathers who wrote the Constitution and the Declaration of Independence worked tirelessly to end slavery. Now with respect Congresswoman, that’s just not true. Many of them including Jefferson and Washington were actually slave holders and slavery didn’t end until the Civil War.

Bachmann: Well you know what’s marvelous is that in this country and under our constitution, we have the ability when we recognize that something is wrong to change it. And that’s what we did in our country. We changed it. We no longer have slavery. That’s a good thing. And what our Constitution has done for our nation is to give us the basis of freedom unparalleled in the rest of the world.

Stephanopoulos: I agree with that…

Bachmann: That’s what people want…they realize our government is taking away our freedom.

Stephanopoulos: But that’s not what you said. You said that the Founding Fathers worked tirelessly to end slavery.

Bachmann: Well if you look at one of our Founding Fathers, John Quincy Adams, that’s absolutely true. He was a very young boy when he was with his father serving essentially as his father’s secretary. He tirelessly worked throughout his life to make sure that we did in fact one day eradicate slavery….

Bachmann: Well, John Quincy Adams most certainly was a part of the Revolutionary War era. He was a young boy but he was actively involved.

Stephanopoulos: Well let me move on to another one of your statements on the issue of jobs which is so central to this campaign. You said back in 2005 that taking away the minimum wage could potentially virtually wipe out unemployment. Where is the evidence for that?

Bachmann: You know I think what we need to do is, again George, focus on job creation. I’m a former federal tax litigation attorney. I worked for years in the federal tax court system and watched how devastating high taxes are on business and individuals and farmers. And I’m also a job creator. My husband and I started from scratch a successful small business. That’s really the focus that I’m hearing today in New Hampshire. People are very upset that the president has us at 9.1 percent unemployment. That is not acceptable. He promised us that we wouldn’t see unemployment go above 8 percent. We’ve lost millions of jobs, people are suffering, they are hurting and I feel their pain and I want to make sure that what we do going forward is actually to address this and turn the economy around and get it on the right track because that’s really what people care about – that’s what they’re talking to me about all across the country.

Stephanopoulos: I think that’s what everyone wants to get this unemployment down but do you still believe that eliminating the minimum wage could virtually eliminate unemployment?

Bachmann: I think what we need to do is bring economists together, people who have been in this field to let us know what are the job killing regulations that could help us in turn put the economy on the right track. And so I think we need to across the board look at all of the regulations of various departments and do that. Unfortunately under President Obama we’ve seen a tremendous expansion of even more government regulations, that’s lead to even fewer jobs being created. So there’s several tactics we need to look at, one is the tax code, another is the regulatory burden that adds approximately 1.7 trillion of burden on job creators. If we could lift that then I think we’d see more people get higher wages, better benefits and more jobs because what we want is more job growth in America rather than to see jobs transferring overseas.

Stephanopoulos: Let me try one more time, so you are saying that the minimum wage is one of those regulations you’d take a look at, you’d try to eliminate it?

Bachmann: Well what I’m saying is that I think we need to look at all regulations, whatever–whatever ones are inhibiting job growth that’s what we need to —

Stephanopoulos: And the minimum wage is one of them?

Bachmann: All regulations George. I think every department. We have just too much expansion of government and so what we need to do is tamp that down so that the American people can keep more of what they make.

Stephanopoulos: Just a couple more questions. Do you think that Sarah Palin is trying to rain on your parade by coming to Iowa today?

Bachmann: You know I think that it’s wonderful that the governor is coming to Iowa. I think that they’ll enjoy her, she’ll certainly enjoy them. People in Iowa are just such wonderful transparent people and it’s their values and their character and their morals that they poured into me when I was growing up there as a little girl. That’s the voice that I want to take to the White House because that’s a voice that has been missing for a long time. We need that kind of common sense again and that – that happy, fiery optimism and I’m looking forward to taking that to the White House.

Stephanopoulos: Finally one—one final question. I think one of the most impressive things that people find in your background is the fact that you and your husband have helped raise 23 foster children and I know you want to shield them but are they prepared and are you prepared for the loss of privacy that comes with the president campaign? And is that something you are concerned about for them?

Bachmann: Well when we were making this momentous decision we sat down for a long time as a family and contemplated what this was meaning and yes, we are ready. We have five wonderful biological children. Our last one is off to college our oldest one is a doctor. And then we had great – a great 23 foster children in our home as well. And as you can imagine and appreciate we’ve tried to keep a good handle on their privacy and we will do that, we will respect their privacy. We are thankful that we had them but we also want to observe their privacy and that of their families.

Stephanopoulos: Okay Congresswoman thanks so much for joining us again this morning.