Stephanopoulos To Hannity: “I Don’t Think You Have The Goods”
video

Stephanopoulos To Hannity: “I Don’t Think You Have The Goods” 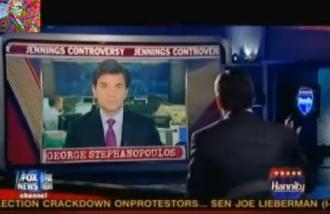 Stephanopoulos’ appearance not only drove home the point that a mainstream media figure thought the FNC host was overreaching, but proved on yet another occasion the willingness of the ABC host to go head-to-head with a Fox Newser.

After Hannity brought up Jennings and insinuated his dangerous statements, Stephanopoulos countered: “I don’t think you have the goods on this one Sean.”

Stephanopoulos continued, by attempting to prove his objectivity at the same time:

I thought it was absolutely appropriate to ask President Obama during the campaign about Bill Ayers, no question about that. Of all the Sunday show hosts, I was the only one to ask him about the ACORN controversy a couple of weeks ago. I think even on Van Jones the guy’s had a good career. But there’s no question that after some of the things that came out the White House had to cut him loose. But on this one, and listen, I don’t know Kevin Jennings, I’ve never met him but it does seem to me that you’ve got a guy here who’s committed his life to teaching and to education.

The discussion, and disagreement, continued throughout the rest of the segment. But it ended as a stalemate. Still, the appearance was a net positive for the ABC host.

“I love the engagement, I want to reach out to as many people as I can,” said Stephanopoulos at the beginning of the interview. This further drives home the point that by appearing on Fox News, the mainstream media Sunday show host can broaden his appeal. And while he continues to compete with NBC’s Meet the Press, still the industry leader despite a closer ratings battle on a weekly basis, branching out to the top cable network can open the door for more viewers.

It’s a practice that we’ve seen before from Stephanopoulos and others at ABC News. We won’t see David Gregory on Hannity, so the ABC-FNC connection can be mutually beneficial.

On another note – the czar focus of Hannity seems to be a mirror of Beck’s Van Jones focus. Beck got real results – Jones was out – and now the FNC host seems to have found his own Van Jones in Kevin Jennings. Will he see the results that Beck was able to accomplish? Stephanopoulos laid out the case against it. If it fails, it will be a blow to Hannity…at a time when Beck is becoming the clear #2 talker behind Bill O’Reilly at Fox News.