Stephen Colbert Gives Jake Tapper Advice On His CNN Debut: ‘Don’t Get Sucked Up In That Whole News Thing’
video

Stephen Colbert Gives Jake Tapper Advice On His CNN Debut: ‘Don’t Get Sucked Up In That Whole News Thing’ 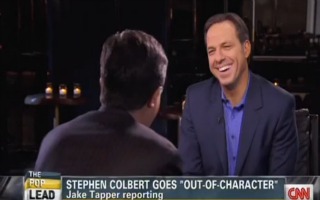 On Monday, Comedy Central host Stephen Colbert joined CNN host Jake Tapper for the inaugural episode of his news magazine program The Lead. He discussed his efforts to help his sister win in a Democratic primary in South Carolina and dished on his long friendship with Tapper. Colbert also offered Tapper some candid advice from “one anchor to another”: report on the stories you love and “don’t get caught up in that whole news thing.”

Tapper grilled Colbert on his efforts to help his sister become the Democratic nominee in a race for Congress in South Carolina. If his sister wins, she will likely face former Gov. Mark Sanford in a special general election to replace appointed Sen. Tim Scott (R-SC). Tapper asked Colbert about his regular divergence from the over-the-top conservative commentator he portrays on The Colbert Report.

“I am willing to, you know, break the jewel of my own creation to try to do something for her,” Colbert said. “I’m not worried about what it would do to me or my show to try to help her as myself, not as my character.”

“If people think that’s not the right thing for me to do, I don’t care,” Colbert continued. “It’s my sister.”

Tapper revealed that he first met Colbert on the campaign trail and later invited him as his guest to a White House Correspondents Dinner. It was there, Tapper disclosed, that Colbert locked in the deal to host his own Comedy Central program.

Colbert said that Tapper though the program’s concept was a “terrible idea.”

“Clearly, I was wrong,” Tapper said.

“Here’s my advice for you, and a wise man once said, do the stories you care about,” Colbert offered. “Don’t get sucked up in that whole news thing.”