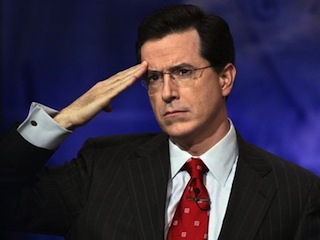 Ever since Stephen Colbert’s Colbert Super PAC first became a real thing, it was clear that he and his staff were creating a fairly ingenious statement condemning the corrupt nature of campaign finance as it now is in our nation. But there was one big question remaining; what the heck was he going to do with all that money? Sure, he bought some ad space in primary states, but there were a whole lot of contributor names scrolling by on our TV screens. What did he have planned? Well, a guest editorial Colbert wrote in South Carolina’s The State has been published today and it reveals some of the behind the scenes dealings that were going on and shows just how brilliant he and his staff’s plan has been.

Recently, there has been a growing debate in South Carolina (Colbert’s home state) over who exactly would pay for the Republican Party’s primary, the first in the southern part of America. State officials had actually begun suing the political parties over the fact that taxpayers were going to have to foot the bill for the vast majority of the costs including debates, advertisements, etc. Colbert then offered to foot $400,000 to help pay the cash-strapped counties’ share. According to his editorial, the South Carolina Republican Party were eager to accept the money…even with some conditions Colbert put forth.

“[The South Carolina GOP representatives] got on a plane and flew to New York to make the deal. Because money talks, B.S. walks, and $400,000 flies business class.

We hammered out a contract over barbecue. Colbert Super PAC would pay up to $400,000 directly to the state and counties to defray the cost of the election. In return, the primary’s official name would be ‘The Colbert Super PAC South Carolina Republican Primary.’ This name would appear on all press releases, official notices and signage, including the debates. We would finally raise democracy to the same level as the Tostitos™ Fiesta Bowl and Kardashian™ weddings.

Most importantly, the following non-binding referendum would appear on the ballot:

In order to address the issue of Corporate Personhood, the enfranchised People of the Sovereign State of South Carolina declare that:
( ) Corporations are people.
( ) Only people are people.”

Can we take a look at what Colbert did? The goal of this whole Colbert Super PAC situation has been to show off the immense level of corporate collusion and greed that goes into are electoral process and he’s done that in the most amazing way possible. He allegedly got people to agree to put a giant corporate logo infront of the entire primary. He literally got the very targets of his satire to agree to being complicit in the entire joke by manipulating their greed which was a part of the joke in the first place. This is basically as if Jonathan Swift had persuaded the British parliament to take a picture holding Irish babies covered in vinegar and served with chips! It’s amazing.

Unfortunately, the South Carolina Supreme Court then ruled against the counties, finding that they should still pay for some of the primary. However, if Colbert is to be believed, the GOP were still perfectly happy to take his money.

“The S.C. Republican Party no longer needed my $400,000, but being Southern gentlemen, they graciously offered to still want it. They would sell me the naming rights, if instead of giving my cash to the counties, I handed it directly to the party. I asked in return that they petition the court to get the referendum back on the ballot. They said no. I offered less money, $200,000, since I was getting only half of our original agreement. They said no.

Desperate, I reached out to the S.C. Democrats, who agreed to file a request to reinstate the referendum. That’s when the S.C. Republican Party withdrew their generous offer to sell me what they weren’t paying for. They told the press that my requests, ‘were considered but were declined,’ because they, ‘were concerned about the sanctity of the primary election.’

Shortly after, news broke that the South Carolina GOP had broken its promise and wasn’t planning on paying more than half of the bill resulting in the Election Commission needing to ask for a taxpayer bailout. So Colbert is again offering money to the state, this time $500,000, again with conditions:

“In return, I ask for only two things: that you support the Democrats’ petition to get my referendum back on the ballot, and that you grant me the pre-negotiated naming rights, which, I think we can all agree, you now own.”

According to the Associated Press, the Election Commission is currently in the process of asking the state’s attorney general if they can accept the money.

The state Republicans will have you believe that they turned down Colbert’s offer right away. However, if he has written this editorial, chances are good that he has evidence to the contrary. If that’s the case, this whole thing will prove to be one of the most ingenius deconstruction of a political issue any comedian has ever attempted.

The Daily Show frequently gets more credit than The Colbert Report, winning most of the Emmy’s and whatnot, but it seems unlikely that they’d ever try anything like this (or be able to what with not having a “character” like Colbert’s persona in the forefront). Colbert and his staff truly deserve their due appreciation for what they’re accomplishing here.

And, the best part? There’s still a chance that every news channel in the country is going to have to start talking about “The Colbert Super PAC South Carolina Republican Primary.”