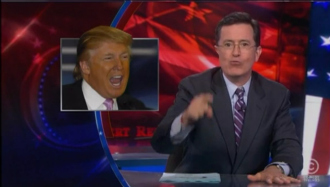 On Tuesday night’s edition of the Colbert Report, Stephen Colbert mocked the topic-du-jour, real estate magnateDonald Trump, and the Romney campaign’s seeming unwillingness to distance itself from him.

“Real estate billionaire and basketball-with-tooth-veneers Donald Trump has found some dramatic new evidence that Barack Obama was not born in Hawaii,” Colbert began the segment. “It’s no surprise to me. I’ve always found the whole Hawaii thing to be implausible. And by that, I mean the state of Hawaii. Their word for hello is the same as their word for goodbye? Bullshit.”

Colbert then showed Trump’s new evidence, which is the 1991 author bio that mistakenly claims Obama was “born in Kenya.” Despite claims that this was simply a clerical error, Trump insists this is proof-positive that Obama’s Hawaiian birth certificate is inauthentic.

“He didn’t know he was running for president, so he told the truth,” Colbert quoted the business mogul, accompanied by a “visual approximation” of Trump — a photo of an orange with a wig.

“Because Trump knows when you’re running for president, you’ve got to get creative with the truth,” Colbert remarked, then played a clip of Trump saying “I have a great relationship with the blacks.”

Colbert mock-celebrated how Mitt Romney has not distanced himself from Trump, even though the “usual lefty brigade … like George Will” has attacked their association with one another. Colbert then mocked the superlative-laden Trump “Tweet-hammer” that responded to Will’s “bloviating ignoramus” comments about Trump.

Colbert then explored Romney’s reasons for not repudiating Trump: he needs to obtain 50.1% of the vote.

“How is Mitt going to get to that 50.1%? He’s already got fiscal and social conservatives already mixed in. That’s not enough,” Colbert said. “Now Trump gets him the birthers. But now he’s got to reach out to the 9/11 truthers, the alien abductees, the doomsday preppers, the Sasquatch hunters, the Sasquatches or Sasqueech.”

“Shit, that’s only 50%,” he continued. “How does he get that tiny sliver that’s gonna be enough? Who represents such a miniscule portion of Americans? Wait, I got it. All Mitt needs are the blacks who like Donald Trump.”