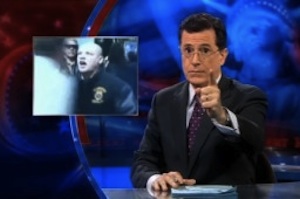 While the internet went crazy over a 43-second clip from The O’Reilly Factor that seemed to catch the show in a lie, Mediaite exonerated The Factor by looking at a longer stretch of the same episode. Of course, context isn’t enough for some people, including The Colbert Report‘s Stephen Colbert, who trained his satirical sights on “Papa Bear” Bill O’Reilly‘s use of palm tree-laden footage during an interview about Wisconsin protesters even though he knew about the context provided by the earlier use of the footage.

At issue is O’Reilly’s insertion of a clip from a California protest as he interviewed reporter Mike Tobin about the protests in Wisconsin. The clip itself was clearly labeled “Union Protests” in the upper left-hand corner, and as Mediaite pointed out yesterday, had been used minutes earlier in a “Talking Points” segment about violent union protests writ large.

Now, Colbert uses satire, so while he seems to be “defending” O’Reilly, what he’s actually doing is suggesting that O’Reilly’s earlier use of the footage doesn’t constitute “context” so much as it does cover. He says “If Wisconsinites wanted O’Reilly to use footage of their protest, while he was talking about possible violence in Wisconsin, those peaceful Wisconsin protesters should have been violent.”

When Colbert says O’Reilly used the footage “earlier in his broadcast,” he fails to note that it was two minutes and nineteen seconds earlier, in the “Talking Points” segment that immediately preceded the “Top Story” segment with Tobin.

Of course, in addition to the controversial California footage, O’Reilly also played footage of Wisconsin protesters angrily reacting to Tobin in one of several incidents where the reporter was shouted down, and even hit. Fox-baiter Eric Boehlert of Media Matters has tried to suggest that Tobin may have exaggerated because Fox hasn’t aired footage of the actual attack, but as extraneous video shows, such footage would consist entirely of protesters blocking the camera. Ironically, Eric Boehlert’s logic is eerily similar to that of Andrew Breitbart‘s, who famously offered a reward for video proof that protesters shouted the n-word at legislators, and trumpeted absence of such footage as proof that it never happened.

As Tobin points out to O’Reilly, he is a reporter, and should be judged on the merits of his own work. On that count, even in his segment with O’Reilly, he is scrupulously fair, refusing even to assume that the pre-printed anti-Fox signs were “professionally made.” This is consistent with every Fox News reporter I know, who, despite the leanings of the network’s opinion hosts, practice journalism cleanly and honestly.

It is Tobin’s commitment to clean journalism, though, that makes the “Wisconsin Palm Tree” problematic. While O’Reilly is clearly innocent of the charge of “lying,” a journalist like Tobin operates at a much higher standard, and it’s fair to wonder if he would have been comfortable with having that footage playing over his reporting about Wisconsin.

While the intent may not have been to mislead, more care could have been taken to ensure that no one could have been misled. There was ample footage of the Wisconsin protesters, but in choosing to use other footage, O’Reilly’s producers could easily have location-stamped it (the way they did the Wisconsin clips). These are choices that might not occur to the producers of an opinion show, but certainly would to a news editor.