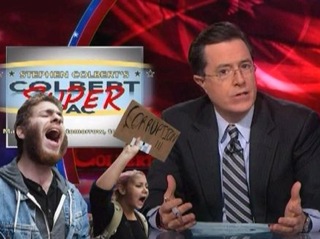 Last night, Stephen Colbert began a mission to turn the Occupy Wall Street movement into his own pet cause, dressed up as Che Guevara and trying to bribe protesters with food and SuperPAC money to hand over their organization. He didn’t succeed yesterday, and so today he continued, offering the two protesters he met with yesterday a personal masseuses, fistfuls of hundred dollar bills, and letting them that their insistence on corporations not being people was racist.

Having sensed that Occupy Wall Street had the potential to become a major movement, and sitting on a war chest of thousands that seemed to have no purpose, Colbert went down and found two protesters willing to meet with him. After trying to feed them expensive food and champagne, the next step was to bring in “Yoshi,” a Japanese masseuse, to calm them down. “She’s with the SuperPAC,” he explained to them dismissively as she began to work on their backs. “We’re popping the champagne, Yoshi’s on the jet,” he explained to them– selling their cause to Colbert would mean living a good life! They declined.

Since their fears were based on Colbert restructuring their message, Colbert explained what exactly he would do to help them out. “Let’s just tweak the message,” he told them, changing a protest sign they agreed with, “corporations are not people,” into something more accessible to Colbert: “corporations are now people.” Needless to say, that didn’t sit well with the protesters, who Colbert then began to call racist for claiming corporations weren’t people. “It seems pretty racist of you to say certain people don’t get to be people,” he argued, adding that it was “dehumanizing” to corporations to treat them that way.

His final effort to sell them his SuperPAC involved a few misplaced quotes (“Jesus said, ‘money talks, bullshit walks'”) and a reminder of a few non-existent movements that could have existed, if only for Stephen Colbert. Those did not work, either.

Watch the segment via Comedy Central, below: