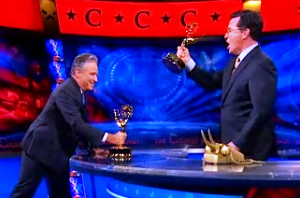 Stephen Colbert broke The Daily Show’s 10-year Emmy-winning streak Sunday night and when The Colbert Report returned last night, all he wanted to do was rub it in Jon Stewart’s face. But Stewart, who showed up in a surprise appearance, didn’t make it easy for him.

Colbert began his show by proudly displaying his two new Emmys, one for writing and his first for Best Variety Series. He apologized for the “verbal gaffe” he made during his acceptance speech when he thanked everyone who works behind the scenes on the show. “I don’t know what I was thinking,” he said, “because I’m the only one who does this show.”

But what really made the night special for Colbert was breaking Stewart’s decade-long winning streak. He pulled out a phone to call his fellow Comedy Central host, but Stewart did him one better by showing up in the studio in person. “I won, Jon,” Colbert said defiantly. “In your face!”

“Stephen Colbert,” Stewart replied, “I couldn’t be happier for you.” He went on to sincerely express how much he loves and respects the man who started out as a correspondent on The Daily Show before striking out on his own to create The Colbert Report.

Stewart said if Colbert really wanted him to be upset, he could, before adding, “but I can’t because I’m an executive producer on your show so I won again, motherfucker!” He then stole one of Colbert’s two Emmys as “11 IN A ROW!” flashed on the screen.

Earlier in the night, Stewart delivered a completely joke-free congratulatory message to his friend for his “well-deserved, long overdue” Emmy wins, which you can watch below, via Comedy Central: