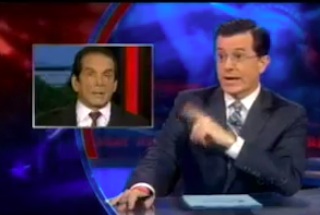 On Thursday’s Colbert Report, Stephen Colbert did a segment on the importance of the youth vote in 2012. “In the 2008 election, Barack Obama had the kids in the palm of his hands. He was a historic candidate. He spoke their language, and he briefly toured with the Black Eyed Peas,” Colbert pointed out. “But, Mr. fresh-faced hopey-changey of 2008 has now become old gray-haired grandpa-didn’t-close-Gitmo. And the ‘younglings’ are in play.”

Colbert noted that Obama won the youth vote by 66% in the last election, but just 45% of young voters say they have a high interest in the fall election. The late-night host then played a Fox News clip of conservative columnist Charles Krauthammer predicting Mitt Romney would have a chance to win if youth voters don’t turn out. “I think if Obama loses the huge edge he has among youth it’s going to be a very, very close election,” Krauthammer had opined.

RELATED: Gallup Poll Finds Young People Support Obama, But Are Less Likely To Turn Out To Vote For Him

“Count Chocula is right,” said Colbert, alluding to the General Mills breakfast cereal mascot. “Good to see him getting work.”

“Obama is clearly panicking, because on Tuesday, in a blatant pander to the youth vote, Obama went on the Jimmy Fallon giggle-time news hour to talk about his student loan policy. It was a pathetically successful ploy to be appealing,” Colbert observed.

He then noted that the Republican National Committee released an ad calling Obama “not funny,” for the appearance.

“Turn off the Atari, Obama, because the game is over,” said Colbert. “So, remember kid, when you step into that voting booth, ask yourself, who do i like? The guy I like? Or the guy I don’t like?”

Watch the segment below via Comedy Central: