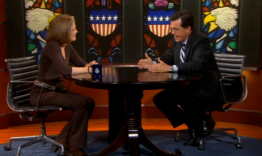 Gloria Steinem returned to The Colbert Report last night (her last appearance nearly four years ago saw her and Jane Fonda cooking with Colbert) to talk about the end of men. Not really. She was mostly there to discuss whether the feminist movement had been successful and what had yet to be accomplished…all in under five minutes!

What she didn’t get a chance to discuss, alas, is the recent surge of Republican female candidates (aka “momma grizzlies”) nor the one topic it would arguably be most interesting to hear her further expound upon, namely Sarah Palin. The lack of conversation on these matters was especially frustrating in light of the fact Steinem’s appearance coincided with news that Nikki Haley had successfully nabbed the Republican nomination for governor of South Carolina; if she wins she’ll be the first woman governor of that state.

Instead, the closest Colbert (who was, in his Colbert way, clearly enamored with his guest) came to the topic was to ask Steinem if she “felt proud” that the GOP was putting out “all the great ladies right now, I think that there are more Republican women holding office right now then there are Democrats.” Responded Steinem: “No, I don’t think so.” Meaning, no she doesn’t think those numbers add up. And that was it! For reasons unclear before Steinem had a chance to respond fully Colbert asked her if men and women had attained parity (no) and the conversation never got back to politics. Not only frustrating but a missed opportunity on Colbert’s part. Watch below. Side note: Steinem did note that more women had retained there jobs during this recession than man primarily because women are paid less…”don’t you think that’s a motive to work for equal pay?”