Sterling and Bundy’s Overt Racism Putting MSNBC’s Decoders Out of Business?
video

Sterling and Bundy’s Overt Racism Putting MSNBC’s Decoders Out of Business? 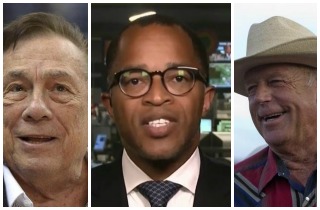 The outing of the overt, blatant, In The Heat of the Night-style racism of Nevada rancher Cliven Bundy and LA Clippers owner Donald Sterling has had a welcome and clarifying effect on the debate over race relations in America. But while MSNBC’s commentators and contributors are celebrating the deserved outing and shaming of these antiquated holdovers from an odious time of American history, their enthusiasm is tempered some.

Appearing on MSNBC with Now host Alex Wagner, The Washington Post‘s columnist Jonathan Capehart put his finger on why the public banishment of Bundy and Sterling to the modern equivalent of the stockades has been a melancholy affair. After citing a 2009 speech in which Attorney General Eric Holder called the United States a “nation of cowards” over its refusal to have an honest conversation about race, Capehart said that America remains country of poltroons on that touchy subject.

Lamenting that Americans, broadly, cannot have a conversation on race in a “calm, trust-filled manner,” Capehart observed that to have that conversation “requires trust.”

This is perfectly true. With a subject so fraught with pitfalls like race, in which one misstatement could result in the loss of livelihood, it is difficult to encourage open and honest dialogue on the subject. This is particularly true when an individual engaged in that discussion is not sure whether his interlocutor is more interested in hashing out differences or merely uncovering an unsophisticated line of thinking on the matter with which to cudgel them.

“Collectively, we don’t trust each other to have that conversation,” Capehart continued. But what appeared to be Capehart’s genuine concern for the state of American discourse on race quickly evolved into a lament over what little expertise it requires for Americans to spot the racism in Sterling and Bundy’s remarks.

“While it’s wonderful that the entire nation erupted in outrage over Cliven Bundy last week and over Donald Sterling over the weekend, and right through today, those are easy reactions to have,” Capehart grieved. “The harder reaction to have and the harder conversation to have is with our friends, and co-workers, and strangers, frankly, about all of the little — the small, the more nuanced ways racism rears its ugly head.”

Indeed. It’s infinitely more difficult to convince the world that the word “privileged,” when applied to President Barack Obama by Texas Gov. Rick Perry, is a racist “dog whistle.” And, yet, Capehart managed this feat. Was Perry inaccurate? Maybe. Insensitive? Quite possibly. But racist? Why, it takes a true professional to divine the “nuanced” racism in that sentiment.

An equally difficult conversation to have about race in America is one centered on convincing thinking Americans that the words “apartment” or “Chicago” are not merely harmless nouns but racially charged code words. Their implication is, of course, recognizable only to the Sterlings and the Bundys of the world, and professional decoders like MSNBC host Chris Matthews.

It’s far too easy to see Sterling berating his girlfriend for appearing in public with African-Americans as racist. The more difficult conversation to have is one about why the word “urban” is not merely a way to describe population density but also a way to say “minorities” with fewer syllables. Fortunately for society, Georgetown University professor Michael Eric Dyson engaged in this challenging enterprise to a chorus of nods among his MSNBC compatriots.

Divining racial antipathy lurking behind the meaning of terms like “PGA tour” and “golf” could only be achieved by a master in the art. As fortune would have it, MSNBC’s Lawrence O’Donnell is just that.

Contorting words like “angry,” “IRS,” and “kitchen cabinet” into toots on the racist shofar is, indeed, what Capehart might describe as hard. Identifying Bundy’s despicable appeals to stereotypes is easy. Anyone could do it. You don’t need any special skills to see the racism there, and being able to identify that racism is not worth that much, much less weekly column and a cable news contributor contract.

The Bundys and Sterlings of the world deserve to be hauled off the public stage. Their harmful views are unconstructive, and it is no virtue to display tolerance toward that level of hatred. The fact that their comments were universally recognized as malignant and backward, and the consequences which befell them both have been widely recognized as appropriate, is progress. The only people who appear to be upset by this development are those who see their competitive advantage in the marketplace of racism detection ebbing away.