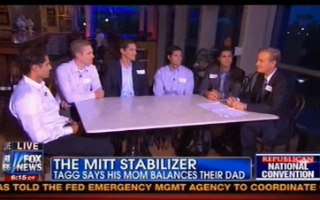 Doocy asked the five brothers what they mean when they refer to their mother, Ann Romney, as the “great Mitt stabilizer.”

“They’re really close,” they said, “so when he is able to take some his stress ask tell her about it, she has to kind of carry that burden. So i think for him, it’s nice to have someone that’s with him that can kind of share what he’s going through and go through it with him.”

“It’s got to be tough on your mom,” said Doocy, “as well as all of you, when, you know, people in the media take — and particularly the other side — takes shots at your dad, doesn’t it?

Doocy then noted that an Obama surrogate in Chicago recently said “inappropriate things about your Mormon religion.” The brothers responded that their father is “a man of faithm, he loves his God,” and it is their hope that the country will be able to see that.

Poor Brian Kilmeade, meanwhile, was left outside to brave the elements while Doocy and the Romney boys enjoyed their chat.