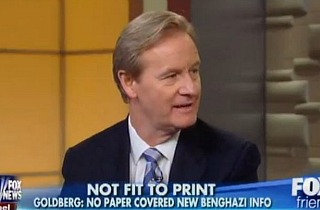 On Thursday morning’s Fox & Friends, the hosts discussed the reaction of the political press to the revelations surrounding New Jersey Gov. Chris Christie’s aide’s allegedly closing two lanes of the George Washington Bridge in order to punish a political adversary.

The hosts contrasted the coverage of that scandal with the press’ disinterest in the 2012 attack on an American consulate in Benghazi. Host Steve Doocy said that the media would display more interest in that attack if Christie had occupied former Secretary of State Hillary Clinton’s position as the nation’s top diplomat in 2012.

Doocy began by citing the findings of a Senate Intelligence Committee report and insisted that the American servicemen and Ambassador Chris Stevens “would be alive today” if the warning signs preceding that attack were heeded by the State Department.

RELATED: Christie Once Revealed the ‘Most Fun Thing About Being Governor’: ‘No Traffic!’

He went on to ask a variety of questions regarding how the White House conducted itself before and after the attack, and why the Obama administration insisted incorrectly that the attack was the result of a spontaneous protest. Fill-in host Clayton Morris noted that the non-Fox press has largely shown a lack of interest in getting answers to those questions.

“The networks did, after some of the coverage, cover Benghazi just a little bit, but can you imagine the coverage Benghazi would be getting today if Chris Christie were the secretary of state at the time this happened?” Doocy asked. “There’s clearly a double standard.”