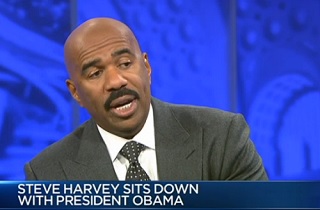 Stand-up comedy pioneer, film and television star, and best-selling author Steve Harvey scored a big interview with President Obama, to air on his syndicated Steve Harvey Show later this month. Just after taping the interview on Friday, Harvey appeared on DC’s NBC-4  to discuss his sit-down with the President, and told News4 anchor Pat Lawson Muse all about it. Among the topics was the brouhaha surrounding the photo that the President took with two other world leaders at nelson Mandela’s memorial, which Harvey dismissed.

Steve Harvey’s nearly 30-year entertainment career, which includes a long-running sitcom and the wildly successful The Original Kings of Comedy concert film, currently finds him hosting a syndicated daytime talk show that has recently enjoyed ratings highs of over 2.5 million viewers, more than almost every show on cable news. It is for those viewers that Harvey scored his interview with the President, which he told NBC4’s Pat Lawson Muse steered largely clear of politics.

“This interview was different, you know?” Harvey said. “I think I talked to him the way most people don’t talk to the President.”

“I told him I wanted a man on man interview,” he continued. “I don’t care about the politics. It’s not important to me. Look, he’s a great guy. There’s a section of people that don’t agree with anything he does. There’s those of us that get it. Let’s talk about family, and the wives, and Christmas. You know, let’s talk about those girls, we got girls the same age, and how we feel about fatherhood.”

Harvey described a range of personal topics that he and the President discussed, including the dating lives of their daughters, for which Harvey offered some unusual advice. Speaking of his own daughter’s husband, Harvey said “Even though he’s great, he’s got two degrees, wonderful, I have a thumbnail the size of a fingernail in a chamber in my heart, where I reserve it, is filled with nothing but hatred for him, in case I need it. I love him, but you got my daughter, so there’s a little bit of hatred. If you hurt her, I’ll kill you, no problem.”

He also defended First Lady Michelle Obama’s expression in the now-famous photo. “First of all, it’s like a 30 second soundbyte,” he said, adding “If you take a 30 second soundbyte of anybody at anytime, they can appear crazy. A photo of this woman who could have been thinking about Mandela’s life, anything could have happened. They want to take this and make her out to be — I have met her. I don’t know a sweeter person. My wife has met her, I don’t know a sweeter person.”

The interview will air December 20 on the syndicated Steve Harvey Show. Here’s the clip, from NBC4: