Steve Kroft On His 60 Minutes Interview: Obama ‘Knows We’re Not Going To Play Gotcha With Him’
video

Steve Kroft On His 60 Minutes Interview: Obama ‘Knows We’re Not Going To Play Gotcha With Him’ 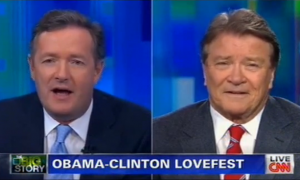 Steve Kroft paid a visit to Piers Morgan on Monday night to discuss his 60 Minutes interview with President Obama and Secretary of State Hillary Clinton. Having covered Obama for several years, Kroft offered his take on the interview as well as Clinton’s tenure and future.

“Why do you think he keeps coming to you?” Morgan asked Kroft of Obama. Kroft posited that Obama simply likes 60 Minutes.

Morgan deemed the interview “gripping,” pointing to their body language and “bonhomie.” Kroft, too, said he was “flabbergasted” when he learned they wanted to do the interview. Their interactions were revealing and fascinating, he added, remarking that he’d never been too sure about the nature of the their relationship.

But where did that bond come from? Probably largely due to Bill Clinton, Morgan hypothesized. The Clintons had been incredibly helpful, Kroft said, and that’s part of the reason Obama likely wanted the interview — to “close the circle.”

The discussion then turned to Hillary Clinton’s tenure as Secretary of State. She “engaged” with many countries that had felt neglected, Kroft said, but the “legacy is unwritten.” It may take a few years or even a decade “to find out what kind of job they’ve really done.”

With her exiting, though, there comes the question of 2016. “If she’s healthy, I think she’ll run,” Kroft predicted. But she has to be sure she has the energy not only to be president, but to make it through the campaign.