Steven Crowder On Union Brawl: If I Defended Myself, ‘They Would Have Killed Me Where I Stood’ 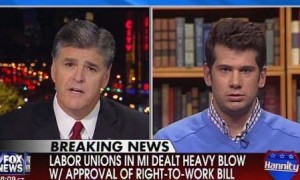 Fox News contributor Steven Crowder found himself in the middle of a brawl as he was attempting to conduct interviews with pro-union protestors in Michigan speaking out against “right-to-work” laws. Crowder got punched while trying to stop protestors from tearing down a tent. Crowder appeared on Sean Hannity‘s show tonight, and explained that if he had lifted a finger to defend himself, the protestors might have “killed me where I stood.”

Crowder reassured Hannity that he was “tough enough to take the union’s greatest punch,” and pushed back against the idea he said was being thrown around on the left that he deserved to get punched for asking the protestors why they oppose right-to-work laws. Hannity defended such laws as “freedom of choice”, while Crowder maintained that “unions are founded on violence here in this country.”

Crowder explained that the protestors immediately got hostile and violent with him just by asking them questions about the laws. As they turned to the tent, Crowder told the crowd there were women and old people inside, to which they reacted by getting more violent with him. Crowder said his intent was not to deliberately “try and be assaulted,” but to expose union violence. He even challenged the man who punched him to an MMA fight.

And to really emphasize the gravity of the situation, Crowder explained just how dangerous the situation was for him.

“I literally believe, Sean, that if I had defended myself at all, even flicked a small little jab, that they would have killed me where I stood. I have never seen this kind of angry, vitriolic hatred… I expected these people to actually tear me limb from limb. I knew I couldn’t take that.”