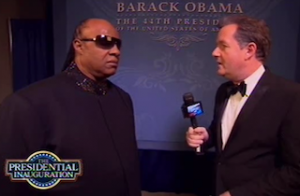 CNN’s Piers Morgan caught up with Stevie Wonder, who was performing at President Obama‘s Inaugural Ball last night, to ask him what he thought of the president’s speech.

“It was a great speech,” Wonder began. He appeared to see an opportunity for the president to move beyond politics in his second term, continuing, “We can’t talk about it and just talk about it, we got to be about it. We’ve got to take off the gloves of being a politician and really look at the reality of how we are and where we are as human beings on this planet.”

The most surprising portion of the conversation came when Wonder brought up the recent mass shootings and Morgan’s coverage in particular.

“I saw you on the TV talking about the whole gun thing,” Wonder said. “And I was talking to one of my friends, and I said, you know, you should go get me a gun, let me go with you to get a gun, and then I can show how easy it is for me to get a gun. Then imagine me with a gun. It’s just crazy. I think we have to do something about it.”

Wonder proceeded to say that he has some ideas on how to solve the gun issue “because there’s a solution to any problem and I think we just have to get to it.”