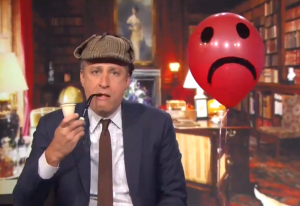 In what can only be described as an epic detective show, Jon Stewart put on his sleuthing cap and went after Dick Cheney‘s claim that Barack Obama was leaving a “terrible burden” on America by striking a nuclear deal with Iran.

“Really. You can’t think of an administration that left a more terrible burden,” Stewart said, before donning his deerstalker, two pipes, and a fedora, and locking Cheney (represented by a red balloon) in his study, to solve the crime of Who Actually Was Responsible for Allowing Iran to Become A Regional Power and Gain Access to Nuclear Facilities.

Using his best detective tropes, Stewart laid out the case that, in fact, it was Cheney in Iraq, with the oil contracts, that allowed Iran to become the regional power: by taking down the Iraqi government, which was keeping the Iranian nuclear program in check, and installing an Iran-friendly prime minister in Nouri al-Maliki, Cheney had allowed Iran’s uranium-enriching centrifuges to multiply by twentyfold by the end of the Bush administration.

And the smoking gun: Stewart uncovered a damning video of Cheney in 1998, when he was a member of Halliburton’s board, complaining that the company could not cut deals with Iran, because of America’s dumb sanctions.

“You, sir, were arguing for the United States to lift sanctions on Iran, so that your company, Halliburton, could get contracts with this radical regime!” Stewart accused the balloon. “Contracts worth millions of dollars! And pardon me if I am impugning your character, but what would you make of a man whose final act in the business world, before joining the American government as Vice President, would be to enter into contracts with the number one state sponsor of terror, just before leaving to become Bush’s running mate?!”

The balloon then floated away, narrowly escaping the law.

Watch below via Comedy Central: