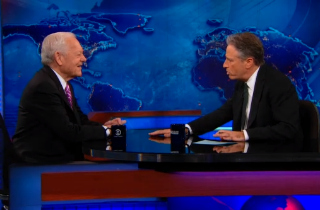 CBS’s Face the Nation moderator Bob Schieffer sat down with Jon Stewart last night for a discussion that largely focused on the gun debate, with both men tearing into the pro-gun advocates who refuse any new gun control laws in the wake of last month’s Sandy Hook Elementary School massacre.

“This seems to be a very explosive conversation,” Stewart said of the national gun debate, “but not a very pragmatic one.” The two then lamented that the media has paid very little attention to the law enforcement officials who may have relevant opinions about the “logistics” of preventing new episodes of gun violence.

Stewart said that, thus far, all we’ve heard about is the fact that “guns are a right, Hitler took away guns … if the Jews had been armed, the Holocaust wouldn’t have happened. That kind of stuff. Why is it that those people get to be on TV?”

Schieffer laughed and seemed perplexed by the question, adding, “If we’re not going to do something now, if killing little people in kindergarten is not enough to say, ‘We’ve got to do something here, we’ve got to get serious,’ then I have a question: What is enough?”

He continued: “It always comes down to the people who turn it around and say they’re going to take away the guy’s gun who goes hunting or lives out in the country. And that’s not what it’s about. It’s about keeping these weapons with this tremendous killing power out of the hands of deranged people. That does not seem all that radical an idea. People keep rat poison in their house to kill rodents, but they keep it on the top shelf.”

When Stewart asked Schieffer if there is any internal newsroom conflict over how to appropriately cover the debate, the veteran CBSer said, “We’re all trying to think, ‘How can we cover this? How can we tell this story? How can we be fair and help people to understand what the issues are, not the issues as they’re told by these interest groups.”