Stewart Applauds Paul For Using Filibuster Over Drones Issue 'Worth Kicking Up A Fuss... 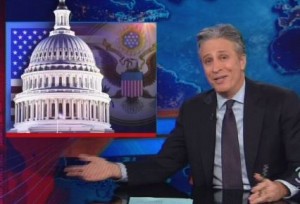 Jon Stewart tonight briefly addressed today’s filibuster by Senator Rand Paul, acknowledging that while he doesn’t see eye-to-eye on much with the Kentucky senator, he credited his attempt to make a very public fuss over whether the government can order drone strikes on American citizens on U.S. soil. The rest of the segment was devoted to Head Start and conservative opposition to President Obama calling for universal pre-school, with Stewart asking what, if not children’s education, the country should invest in.

Stewart was stunned to find that Paul was actually doing a “good old-fashioned actual talkie filibuster” like the kind our grandparents used to see, highlighting how attorney general Eric Holder basically said in a letter to Paul that technically speaking, they would necessarily rule it out. Stewart praised Paul for using the filibuster “the way it’s meant to be used” and said that “drone oversight is one [issue] certainly worth kicking up a fuss for.”

Stewart then moved on to conservatives raising questions about Obama’s proposal of universal pre-school. Stewart mocked objections ranging from the rising amount of paperwork to how pre-school is “not effective after the third grade,” dryly saying that “at that point you’re supposed to go to the fourth grade!”

Stewart said that one could either suggest that Head Start could be applied to the third grade, or that the “benefits of the program only last a few years, so fuck it!” Stewart marveled at how people were objecting to how much money it would cost, suggesting that children should just “get jobs and pay for it themselves!” He pointed out how the military wants more people to have basic early child development, suggesting a few military division: “SEAL Team Actually 6.”