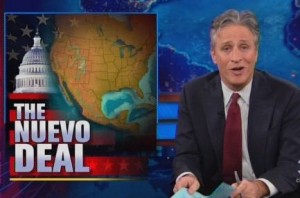 Jon Stewart took on the nation’s immigration problem tonight, and what the Republican party needs to do to win over the Hispanic vote. Stewart described illegal immigrants as “America’s secret sauce” before surmising that the only reason the Republican party wants to tackle reform is part of a “craven political calculation to squeeze out enough votes to make Nevada competitive again.”

RELATED: John McCain: Without Backing Immigration Reform, ‘Our Chances Of Being In The Majority Are Minimal’

Stewart ran clips of Republicans proposing increasingly more drastic measures for dealing with immigration reform, including Herman Cain‘s suggestion of an electric fence. Stewart remarked that “the arc of history is long, but it bends towards shamelessness.”

Stewart then turned to correspondent Al Madrigal in his panic room… er, Hispanic room. Madrigal said that Republicans are reaching across the aisle with one hand while holding their noses with the other, all while chanting the old saying, “forced at last, forced at last!” But he doubted the GOP proposals would work, since according to Madrigal’s chart, “a full 65 percent of Latinos hold grudges.”

So the only path to victory would be to pull votes from “previously offended demographics,” like Asians or fiscally conservative gays. Stewart brought up the black and female communities, to which correspondent Jessica Williams popped up to explain why neither is going to happen anytime soon. (Hint: Todd Akin is involved.)