Stewart Grills Sebelius on Obamacare: ‘Level of Incompetence That’s Larger Than What It Should Be’
video

Stewart Grills Sebelius on Obamacare: ‘Level of Incompetence That’s Larger Than What It Should Be’ 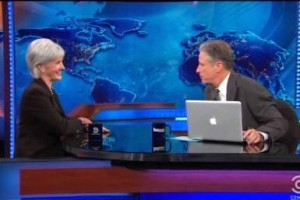 For someone who’s been highly critical of Republicans opposed to Obamacare, Jon Stewart was really adamant in pressing Health and Human Services Secretary Kathleen Sebelius about issues he has with the health care bill, from the website bugs to the one-year business delay that individuals didn’t get. He repeatedly pressed that last point and got noticeably frustrated at the lack of a clear response.

Stewart did not receive an answer after asking how many people signed up for the website, before bringing up the “legitimate criticism” about individuals not receiving the one-year delay. Stewart said it looks like “you were favoring small business,” and despite Sebelius attempting to explain that this is only a small percentage of businesses and small businesses have no mandates, Stewart still couldn’t figure the logic out.

When he went to commercial break, Stewart asked, “Can we come back and ask some more questions? Can I ask the same one?”

In the second part of the interview, Stewart kept going, calling the issues with Obamacare “frustrating” due to the “level of incompetence that’s larger than what it should be.” He pointed out that businesses are cutting worker hours to exploit a loophole in the law, but Sebelius said that’s not true. Stewart also wondered if they could actually run it well, pointing out the issues the government has had managing the VA.

And then, very briefly at the end of the show, Stewart expressed his exasperation with the non-answers, and even wondered aloud if Sebelius was lying to him.

Watch the interview below, via Comedy Central:

And the brief post-interview moment here: