Stewart Hits Back At Krugman: If Anyone’s ‘Ruining Their Brand With A Trillion-Dollar Coin Idea,’ It’s You
video

Stewart Hits Back At Krugman: If Anyone’s ‘Ruining Their Brand With A Trillion-Dollar Coin Idea,’ It’s You

Stewart Slams Krugman: If Anyone's 'Ruining Their Brand With $1T Coin Idea,' It's You 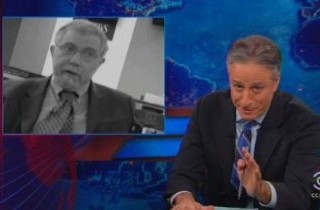 Jon Stewart responded to criticism from economistPaul Krugman Monday about his “lazy” response to the possibility of minting a trillion dollar coin to solve the debt ceiling crisis. The conclusion Stewart came to? “I stand by our research on this topic, the due diligence and my ignorant conclusion that a trillion dollar coin minted to allow the president to circumvent the debt ceiling, however arbitrary that may be, is a stupid fucking idea.”

Stewart called Krugman the “rare gray-beared urban laureate” and “the only creature more noble than a freshly felched unicorn.” He mocked the idea that he was “lazy,” saying he was on his show “banging it out four days a week, 22 minutes a day.”

RELATED: Krugman Slams GOP For Debt Ceiling Threat On ABC’s This Week: ‘This Is Hostage-Taking’

He also took exception to Krugman’s insults directed as his staff, saying, “Don’t blame my ignorance on my staff, that’s all me.”

Stewart played a clip of Krugman saying that he was “ruining” his “brand” by simply pointing to the opposition as “stupid,” and noted, “I’m pretty sure that is my brand.”

Furthermore, he said, “if somebody is ruining their brand with a trillion dollar coin idea, I dont think it’s the non-economist.”

Just to make sure there were no hard feelings, Stewart made clear he was a “fan” of Krugman.