Stewart Jabs Obama on Syria, Gets Tough with Putin: ‘You Want Us To Go Rocky IV on Your Ass?’ 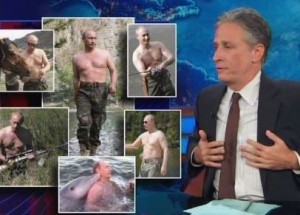 Jon Stewart took President Obama to task over his big Syria speech, calling him out for getting outraged at this particular violation of international norms, while getting tough with Vladimir Putin for his provocative New York Times op-ed challenging American exceptionalism.

Thanks to the Russian plan, the U.S.’ plans to “bomb the truth” out of Syria on its chemical weapons have been temporarily put on hold. Stewart mocked Obama’s address both for losing all the momentum it had behind it and for taking particular outrage at this violation of international norms when he wasn’t really that committed to prosecuting torture under the Bush years.

Stewart rounded up the media reactions to the new deal, with Fox News mostly concluding that Putin has made a fool of Obama. Stewart couldn’t understand the outrage, since this was exactly the plan Fox News chief Roger Ailes came up with a while ago. Then again, Stewart noted, Ailes might be the expert at dealing with “egomaniacal sociopaths.”

But Stewart then turned his gaze to Putin, calling him out for playing the “equality card,” and asking the Russia leader, “You want us to go Rocky IV on your ass?!”