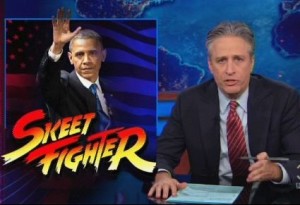 After taking on Wednesday’s hearings on gun control, Jon Stewart examined a far more pressing gun controversy: does President Obama skeet-shoot, and if he really does, why are there no pictures of it? Stewart derided all the conservative calls for proof, mockingly asking “Why won’t the black man half the country lives in fear of release a picture of himself holding a gun?”

Stewart first found it odd that of all places for Obama to reach out to gun owners and brag that he skeet-shoots “all the time,” it would be in the pages of The New Republic. Stewart compared it to “telling Ms. Magazine ‘I love NASCAR.'” But more importantly, Stewart said it would never work because no matter what, Obama was just going to get attacked for it anyway.

And so commenced the traditional rolling of the Fox News reaction montage. Stewart responded to all the conservative skepticism by mockingly asking, “Why won’t the black man half the country lives in fear of release a picture of himself holding a gun?” Stewart lamented how the controversy has gone beyond Fox and poured into the White House press room.

But what Stewart found most amazing is why this controversy was so blown up in the first place. He asked, “Since when did the ability to fire a weapon become a badge of honor, a patriotic achievement? All you need is a finger!”

Stewart tried to explain to Obama why people will hate him no matter what he says and does with a fake Dr. Seuss book titled “Oh, The People Who Hate You.” Here is the final verse Stewart read:

“You cannot reach across the aisle,
‘Cause everything you do is vile.
They complained when you killed Osama!
So on a train, a plane, or a llama,
Rolling a 44 at Bowl-O-Rama,
Despite your nice white Kansas mama,
comma,
they do not like you, Barack Obama.”